government: military junta
state of civil and political rights: Not free
constitution: 10 May 2008
legal system: based on English common law
legislative system: unicameral People's Assembly (Pyithu Hluttaw)
judicial system: limited; remnants of the British-era legal system in place, but there is no guarantee of a fair public trial; the judiciary is not independent of the executive
religion: Buddhist 89%; Christian, Muslim and Hindu minorities
death row: +
year of last executions: 0-0-1988
death sentences:
executions: 0
international treaties on human rights and the death penalty:
situation:

The death penalty for political opponents

A Myanmar military tribunal has handed down death sentences to eight more youths accused of attacking junta targets in Yangon, bringing the total number of those facing the death penalty since the coup to over 110.

A Myanmar military tribunal has handed down death sentences to eight more youths accused of attacking junta targets in Yangon, bringing the total number of those facing the death penalty since the coup to over 110. They were sentenced under the Counter-Terrorism Law.
One of the eight was sentenced in absentia and the others in person on 30 March.
The junta claimed in an announcement on 31 March that the eight including two women killed an alleged informant in North Okkalapa Township and were involved in gun and explosives attacks on the township police station and its forces.
The junta added that the youths had associated with designated terrorist groups.
Death sentences have been handed down to anti-regime protesters in townships currently under martial law, despite international condemnation. The military regime has imposed martial law in Hlaing Tharyar, Shwepyithar, South Dagon, North Dagon, Dagon Seikkan and North Okkalapa townships in Yangon, as well as in townships in Mandalay.
Until late March, the junta had sentenced 98 people to death including two minors for the alleged offenses of high treason; sedition; obstructing military personnel and civil servants performing their duties; and having ties to unlawful associations, according to rights group the Assistance Association for Political Prisoners.
The junta on 31 March also handed harsh sentences to more than a dozen young people opposed to its rule.
Among them were Yangon University of Economics Students’ Union chair and treasurer Ko Khant Thu Aung, as well as Ma Yin Myat Noe Oo, Ko Phyo Kyawt Naing and Ko Min Hein Khant from the same university. The four were sentenced to three years’ imprisonment with hard labor by Yangon’s Insein Prison Court on 31 March under incitement charges for allegedly supplying information to a foreign journalist.
Ma Yin Myat Noe Oo, 22, also previously faced a three-year prison term under the same charge for putting up anti-junta posters.
Dagon University student Ko Kyaw Linn Htut; Ma Su Yee Lin, a member of a Yangon-based students’ union; and freelance journalist Ko Zaw Linn Htut were also sentenced to three years’ imprisonment.
In Dawei city, Tanintharyi Region, three youths—Ma Soe Mie Mie Kyaw, who earlier attempted to commit suicide after being tortured, Ko Soe Pyae Aung and Ma
Shar Pyae Khin—were handed an additional five years in prison on top of their previous two-year sentences by the Dawei Prison Court on 31 March.
Since the coup, the junta has killed at least 1,723 people and arrested more than 13,000 including elected leaders, lawmakers, activists, medics, students and children, mostly for opposing its rule.

Two prominent political activists in military-ruled Myanmar have been sentenced to death on suspicion of being involved in terrorist activities, a military television station reported 21 January 2022.
Myawaddy TV said in a news broadcast that evening that Kyaw Min Yu, also known as Ko Jimmy, and Phyo Zeyar Thaw, also known as Maung Kyaw, were convicted under the national counterterrorism law. They were convicted of crimes, including explosives, bombing, and terrorist financing.
Both have been detained since their arrest, unable to comment on the allegations, and no lawyer appeared to comment on their behalf. Min Yu’s wife, Nyler Tain, denied the allegations filed against her husband in October.
Details of their proceedings were not available as the proceedings were filed in a closed military court. It was unclear if the two cases were related.
The two are one of the most prominent activists sentenced to death since the military seized power from the Aung San Suu Kyi elected government last February.
The hijacking triggered a large and popular protest, which has since turned into a low-level rebellion after nonviolent protests have encountered deadly forces by security forces. It is estimated that about 1,500 civilians were killed and more than 11,000 were arrested for political crimes.
Some resistance factions are engaged in assassinations, drive-by shootings, and bombing in urban areas. Mainstream opposition organizations generally deny such activities and support armed resistance in rural areas, which are often the target of brutal military attacks.
Kyaw Min Yu is one of the leaders of the 88th Generation Student Group, a popular uprising veteran who was unable to seize the position of the previous military junta.
Since then, he has been politically active and has spent more than 12 years behind the bar. His October 23 arrest in Yangon was originally reported by his wife, an activist who had been imprisoned in the past. Both were hidden after the February acquisition, but she is believed to be still hidden.
Two weeks after his arrest, a statement from the military-installed government accused Kyaw Min Yu of “conducting terrorism acts including mine attacks to undermine the state stability,” and alleged that he headed a group called “Moon Light Operation” to carry out urban guerrilla attacks.
He had already been on the wanted list for social media postings that allegedly incited unrest.
Phyo Zeyar Thaw is a former member of Suu Kyi’s National League for Democracy. He was a hip-hop musician before becoming a member of Generation Wave, a political movement formed in 2007.
He was arrested on 18 November with weapons and ammunition, according to a statement from the ruling party at the time.
The statement also stated that he was arrested based on information from those arrested the day before for carrying out a security guard shooting.
Other statements from the military accused him of being a key figure in a network of dozens of people allegedly carrying out what the military described as a “terrorist” attack in Yangon. 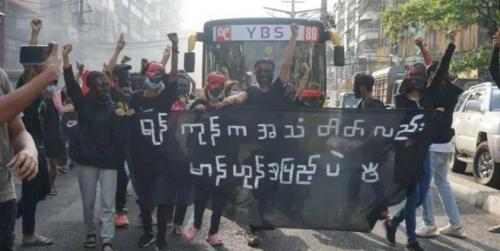 Myanmar military tribunal has sentenced fifteen youths to death and life imprisonment in Yangon, Burma News International reported on 22 March 2022, citing the military council.
Those convicted are from Yangon Region’s North Okkalapa, Kyimyindaing, Hlaingtharya and Dagon Myothit (Seikkan).
Among those, four youths were sentenced to death under section 302 (1-B) of the criminal code for the killing of an administrator and a teacher.
The rest, eleven youths, were sentenced to life imprisonment under sections 50 (a) and 50 (i) of Anti-Terrorism Law for grenade attacks at the Thaunggyi police station, government buildings and public places.
The coup junta has declared martial law in Yangon Region’s six townships, including Hlaingthaya, where military tribunals have been set up to impose the maximum sentences. 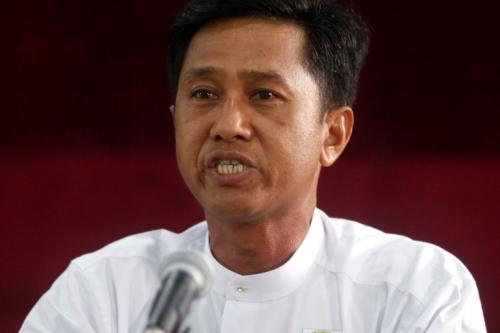 MYANMAR: MORE THAN 100 SENTENCED TO DEATH IN YANGON SINCE COUP

Myanmar’s junta has condemned more than 100 people to death in the Yangon region alone since it seized power a year ago, Radio Free Asia reported on 27 January 2022.

Myanmar’s junta has condemned more than 100 people to death in the Yangon region alone since it seized power a year ago, Radio Free Asia reported on 27 January 2022.
None of the people sentenced were given the right to defend themselves. Of the 101 people documented by RFA’s Myanmar Service, 50 were convicted in secretive military tribunals where they were denied access to legal representation, while the rest were sentenced in absentia.
Those convicted hailed mostly from the Yangon townships of North Okkalapa, South Dagon, North Dagon, Hlaingtharyar, Dagon Port and Shwepyithar, where martial law has been in place amid resistance to military rule.
Two of the more well-known prisoners facing the death penalty are Phyo Zeyar Thaw, a lawmaker with the deposed National League for Democracy (NLD) party, and activist Ko Jimmy, a leader of the 88 Generation Student group. Both were sentenced for violating the country’s Anti-Terrorism Law, according to a 21 January announcement by the junta.
Bo Bo Oo, a former NLD lawmaker from Yangon’s Dallah township, told RFA that not only were the two men sentenced without legal representation, but photos suggested they were tortured during interrogation.
“We could say they are two of the worst cases of arbitrary arrests and torture of civilians in the country since the coup,” he said.
“Both were given maximum sentences. By closely looking at the pictures [released by the junta] of the two, we could surmise they had been severely tortured during interrogation. Arresting and torturing people anytime, anywhere, is a threat to civilization.”
Bo Bo Oo said the junta is cracking down on those who oppose it and sending a message to imposing maximum penalties including death.
Ko Jimmy’s wife, Nila Thein, who is also a well-known 88 Generation Student, told RFA that she would not negotiate with the junta over her husband’s sentence and would continue to fight for democracy.