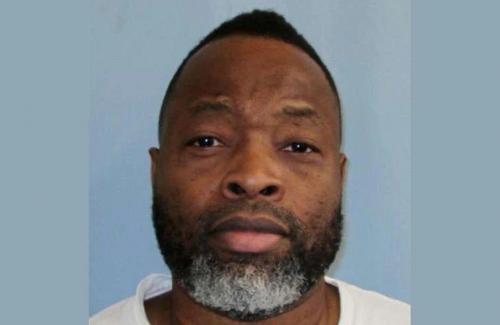 Alabama corrections officials apparently botched Joe Nathan James' execution last month
Alabama corrections officials apparently botched an inmate's execution last month, an anti-death penalty group alleges, citing the length of time that passed before the prisoner received the lethal injection and a private autopsy indicating his arm may have been cut to find a vein.
James was put to death July 28 for the 1994 shooting death of his former girlfriend. The execution was carried out more than three hours after the U.S. Supreme Court denied a request for a stay.
“Subjecting a prisoner to three hours of pain and suffering is the definition of cruel and unusual punishment,” Maya Foa, director of Reprieve US Forensic Justice Initiative, a human rights group that opposes the death penalty, said in a statement. “States cannot continue to pretend that the abhorrent practice of lethal injection is in any way humane.”
The Alabama Department of Forensic Science declined a request to release the state's autopsy of James, citing an ongoing review that happens after every execution. Officials have not responded to requests for comment on the private autopsy, which was first reported by The Atlantic.
At the time of the execution, Alabama Corrections Commissioner John Hamm told reporters that “nothing out of the ordinary” happened. Hamm said he wasn't aware of the prisoner fighting or resisting officers. The state later acknowledged that the execution was delayed because of difficulties establishing an intravenous line, but did not specify how long it took.
Dr. Joel Zivot, a professor of anesthesiology at Emory University and an expert on lethal injection who witnessed the private autopsy, said it looked like there were numerous attempts to connect a line.
Zivot said he saw “multiple puncture sites on both arms” and two perpendicular incisions, each about 3 to 4 centimeters in length, in the middle of the arm, which he said indicated that officials had attempted to perform a “cutdown,” a procedure in which the skin is opened to allow a visual search for a vein. He said the cutdown is an old-style medical intervention rarely performed in modern medical settings, and that it would be painful without anesthesia. He also said he saw evidence of intramuscular injections not in the vicinity of a vein.
The Alabama Department of Corrections prison system issued a written statement in which it noted that “protocol states that if the veins are such that intravenous access cannot be provided, the team will perform a central line procedure,” which involves placing a catheter in a large vein. “Fortunately, this was not necessary and with adequate time, intravenous access was established,” the statement said.
Alabama does not allow witnesses from news outlets to watch the preparations for a lethal injection. They get their first glimpse of the execution chamber when an inmate is already strapped to the gurney with the IV line connected.
A reporter for The Associated Press who attended the execution observed that James did not respond when the warden asked if he had final words. His eyes remained closed except for briefly fluttering at one point early in the procedure.
Lawyers who spoke with James by telephone said they were disturbed by his reported lack of movements and raised questions about what happened before the lethal injection. Hamm said James was not sedated.