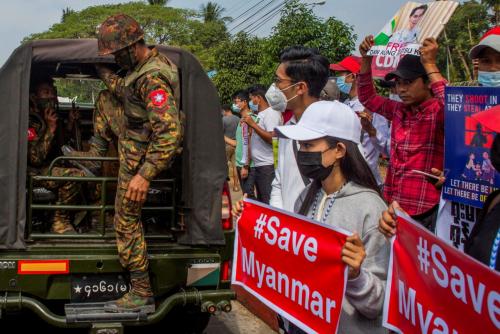 Japan’s defense ministry said on 22 September 2022 it will halt training for members of Myanmar’s military from next year over the junta’s executions of pro-democracy activists.
In July, Myanmar’s junta executed four prisoners, including a former lawmaker from Aung San Suu Kyi’s party and a prominent activist, in the country’s first use of capital punishment in decades.
Before the executions, then-Japanese defense minister Nobuo Kishi had called on the junta to “swiftly end violence” and “take concrete measures to restore democracy.”
But absent any reform efforts and following the executions, “we have decided it is not appropriate to maintain defense cooperation and exchanges with Myanmar,” a ministry official told AFP, declining to be named.
Since 2015, Japan has received 30 members of the Myanmar military as students at facilities including the National Defense Academy.
The program is intended to help the students acquire “correct knowledge about democracy and civilian leadership” of the military, through interaction with Japan’s Self-Defense Forces, Kishi told parliament in April.
There are currently 11 military personnel in Japan as part of the program and they will be allowed to complete their training, but new applications will no longer be accepted, the official said.
Myanmar’s junta has sentenced dozens of anti-coup activists to death as part of its crackdown on dissent after seizing power last year, but the country had not carried out an execution for decades.
A major provider of economic assistance to Myanmar, Tokyo has long-standing relations with the country’s military.
After the coup, Japan announced it would halt all new aid, though it stopped short of imposing individual sanctions on military and police commanders.
The decision to continue training military personnel after the coup was heavily criticized by rights groups.
“It’s mind-boggling that Japan is providing military training to Myanmar cadets at the same time as its armed forces are committing crimes against humanity against Myanmar’s people,” global rights organization Human Rights Watch said in a statement last year.