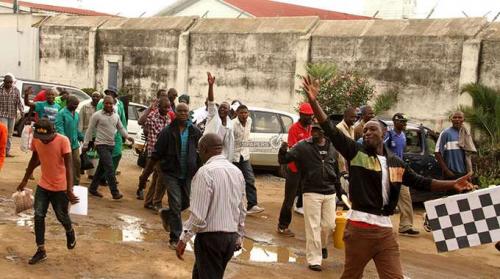 Some of the former inmates walk out of Harare Central Prison

At least 16 inmates sentenced to death have escaped the hangman’s noose when their death penalties were commutated to life when President Mnangagwa pardoned thousands of prisoners across the country in a bid to decongest prisons.
Some of the inmates freed under Presidential Amnesty, are welcomed by relatives at Harare Central Prison, March 26, 2018. Those who benefited were juveniles, prisoners sentenced to 36 months and those over the age of 60 years. There were 101 inmates on death row countrywide.
Speaking at Harare Central Prison where 173 inmates were being released, Zimbabwe Prisons and Correctional Services spokesperson Assistant Commissioner Elizabeth Banda said some inmates, who had served over 10 years and were on death row had their sentences reduced to life.