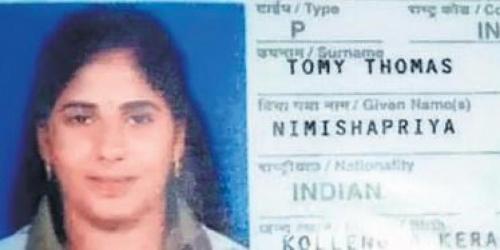 In a temporary relief to the family members of Nimisha Priya, an Indian nurse who has been sentenced to death in Yemen, the apex court in the country on August 29, 2020 accepted her appeal against the death penalty imposed against for murdering a Yemeni man. According to the legal experts in India who are monitoring the case closely, this can be considered as an interim stay on the case, as per the Yemeni proceedings.
“Nimisha’s appeal was accepted and this means that the court has put an interim stay to the case. She will now get time to start negotiation with the family of the deceased man, regarding blood money,” said KL Balachandran, an advocate who was directed by NORKA (Non-Resident Keralites Association) to go to Yemen for Nimisha. However, due to the COVID-19 situation, the advocate has not been able to fly to Yemen.
30-year-old Nimisha, a native of Kerala, who had been running a clinic in Yemen from 2015, has been sentenced for the murder of Talal Abdo Mahdi, a Yemeni man in 2017, who had been torturing her for two years. Nimisha did not get any legal aid in the lower court which considered the case and was given the death penalty. A higher court where Nimisha filed an appeal, recently upheld the lower court’s verdict. After this, Nimisha had last week filed an appeal against the order in the country’s apex court.
According to advocate Balachandran, the court accepting to hear her appeal is a minor relief as Nimisha will get more time to start a negotiation with Talal’s family.
“Very soon, a three-member team, including two people from the Indian Embassy, will be holding talks with a local tribal Sheik, who will mediate the negotiation with the family for the blood money. They have already reached out to the Sheik,” Balachandran told TNM. The team is trying to negotiate with Talal’s family to accept the blood money, which can go up to Rs 70 lakhs.
Nimisha’s family lives in Kerala, her husband Tomy works as an auto driver in Thodupuzha, while her mother is a domestic helper in Ernakulam.
Talking to TNM, Nimisha had earlier recounted the incidents which preceded the murder. In addition to the physical torture, Talal had confiscated her passport and cheated her in her business. According to Nimisha, she had drugged Talal to sedate him in order to get back her passport which he had hidden, leading to his death.
After his murder, Talal was cut into parts and was disposed of in a water tank. Nimisha and a Yemeni nurse, who helped her to dispose of the body, was arrested a month after the murder.