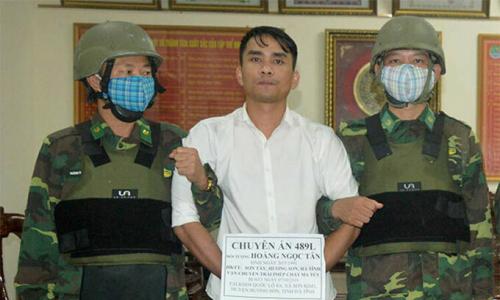 Three men in central Vietnam – one in Ha Tinh and two in Nghe An – were awarded death sentences on 15 May 2020 for drug trafficking.
The Ha Tinh People’s Court sentenced 29-year-old Hoang Ngoc Tan to death after he was caught carrying six packs of heroin from Huong Son District in the province to Ho Chi Minh City. The drug was found in his motorbike trunk on 7 October last year by border guards.
Tan told the court that in September, he had been asked by a stranger on a social network to buy heroin in Laos and transport it to HCMC. Tan was promised VND70 million ($3,000) for the job. The heroin was brought into Vietnam via the Laos border.
In Nghe An, local 45-year-old Hoang Nghia Van and 37-year-old Cho Mua from Bolikhamsai Province in Laos were also sentenced to death for trafficking drugs. Mua Ba Va, 32, of the province’s Ky Son District, was sentenced to life for the same crime.
In March 2019, Van had met a woman named Nguyen Thi Ly in HCMC. Ly asked Van to buy drugs when he returned to Nghe An and promised to pay him VND17 million if he succeeded.
A month later, Van returned to Nghe An and stayed there until 9 May. Then he went to Bolikhamsai in Laos to marry a woman and he met Cho Mua, a relative of his wife. Cho Mua agreed to purchase drugs for Van. After the wedding, Van returned to Vietnam and informed Ly that he has found a source. Ly said she would send Van VND2 billion ($86,000) to buy 15 kilos of ketamine.
On 27 May, Van received the money from Ly and gave it to Cho Mua, who used it to purchase the ketamine from a Laotian. Mua hired Va to transport the drugs for $2,000. After receiving the drugs in the forest, Mua rode a motorbike carrying Va, who was holding the packages in the back. The two were caught in Huong Son District, Ha Tinh Province. Van was arrested as he waited for Mua to deliver the ketamine to him.Police have not been able to find and verify the identity of Nguyen Thi Ly.