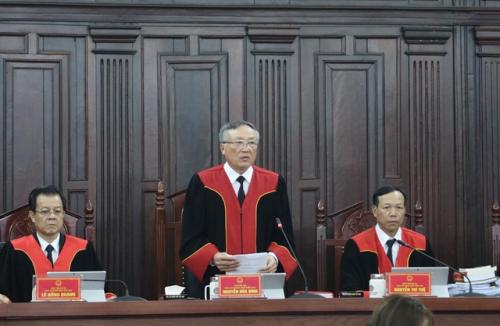 The Vietnamese Supreme People’s Court on 8 May 2020 rejected the request of the Supreme People’s Procuracy to re-investigate Hồ Duy Hải’s case.
Hải was sentenced to death for robbing and murdering two post office workers in 2008.
His mother, claiming he was wrongfully convicted, has been requesting the courts review his case for the past decade.
After receiving a request for a petition in his case from Hải’s family, the Supreme People’s Procuracy of Việt Nam petitioned for a cassation trial at the end of 2019.
A cassation trial was held between 6 May and 8, 2020 to review the case.
According to the judges' council, in Hải’s testimony, with the participation of investigators, prosecutors, defence lawyers, he admitted killing the two staff members.
After that, Hải robbed the victims and Cầu Voi Post Office.
Upon receiving the prosecution and investigation decision, he agreed with the content.
At the first instance session, Hải did not accept his charges of murder and robbery, but did not prove his innocence.
After the first instance trial, Hải filed an appeal for a mitigating penalty. At the appellate session, sometimes Hải pleaded guilty, sometimes he pleaded not guilty.
According to the judges on 8 May, the courts at the first instance and appeal had evidence to accuse Hải.
Although the process of investigation, prosecution and trial had shortcomings, these shortcomings do not change the nature of the case. It is not necessary to cancel the first-instance and appellate judgments for re-investigation as requested by the Supreme People's Procuracy.