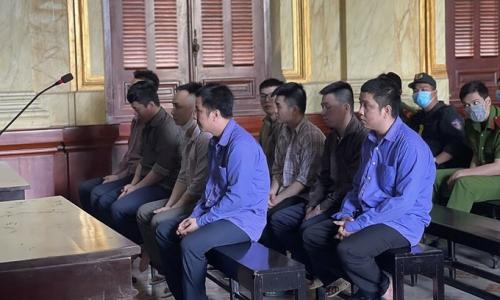 The eight members of the gang

A court in Ho Chi Minh City on 12 January 2021 sentenced six drug traffickers to death for smuggling 13.8 kilograms of synthetic drugs and ketamine from Cambodia into the city.
Nguyen Thanh Phat, 33, identified as the ringleader, and his five accomplices, aged between 27 and 29, were delivered death sentences while two others received a jail term of 20 years each, Phap Luat TPHCM (HCMC Laws) newspaper reported.
All were found guilty of "illegal trading and trafficking of narcotic substances."
According to the indictment, in September 2019 police raided an apartment in District 7 and found over seven kilograms of synthetic drugs and ketamine hidden in the living room and other areas. Officers arrested Phat and his accomplices shortly after.
Expanding the investigation, police discovered the ring led by Phat had transported a total 13.3 kilograms of drugs from Cambodia by coach into HCMC before distributing them to customers.
Those convicted of possessing or smuggling more than 600 grams of heroin or more than 2.5 kilograms of methamphetamine face the death penalty. The production or sale of 100 grams of heroin or 300 grams of other illegal narcotics is also punishable by death.
But despite some of the world's toughest drug laws, drug busts remain frequent in Vietnam.