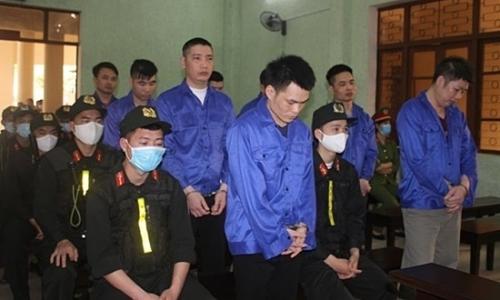 Carrying 162 kg of drugs, six smugglers were awarded capital punishment in the northern Cao Bang Province on 9 March 2020.
Tran Van Bang, 33, Tran Van Thanh, 32, Nong Tai Kinh, 30, Nong Van Khoi, 29, Tran Van Thu, 32, and Nong Tai Tuong, 34, were sentenced to death by Cao Bang People's Court.
Phan Van Hien, 32, Phuong Thi Ly, 23, Trieu Van Tinh, 31, Phuong Ich Dau, 37, and Doan Trong Duy, 27, received life sentences.
Nguyen Van Quyen, 40, was jailed for 27 years.
Bang, the mastermind, traded around 157 kg of heroin from November 2017 to February 2018, the court stated.
Cao Bang police found Bang in a car transporting heroin and methamphetamine in Hung Dao Commune on 23 February 2018.
Bang said he received the drugs from a man in northern Son La Province for personal use, and that his cousin Thanh was following in another car from northern Vinh Phuc Province to Cao Bang to sell four bags of heroin to Kinh and Khoi, according to investigators.
Seeing Bang being arrested, Thanh turned his car around and drove towards northern Bac Kan Province before dropping all the heroin by the road. Police however retrieved the bags and found 95 kg of heroin inside.
Further investigations uncovered the rest of the gang who confessed to have traded around 162 kg of drugs in total from Son La to Cao Bang, worth billions of VND (VND1 billion = $43,000).