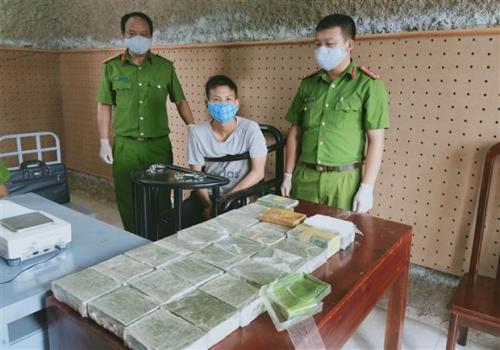 One of the convicted along with the exhibits

Seven men residing in the northwestern border province of Dien Bien were sentenced to death on 21 August 2020 for drug trafficking.
Meanwhile, three others were given lifetime imprisonment.
In May 2019, Dien Bien anti-drug police and customs officials caught Mua A Lenh, born in 1987, red-handed trafficking more than 655gr of heroin.
Further investigation showed that the other nine men also involved in trafficking a total of 150 heroin bricks in October 2018.
The convicted were also ordered to hand in nearly 400 million VND (17,200 USD) to the State budget while the confiscated heroin bricks will be destroyed.