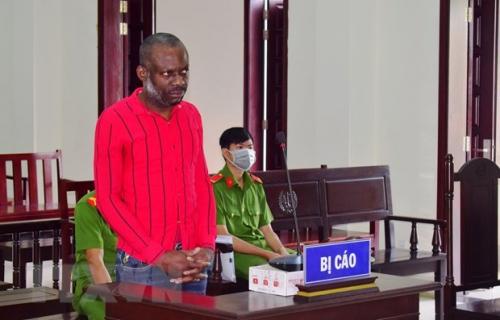 The People’s Court of the southern border province of Tay Ninh on 2 March 2021 handed down the death penalty to a Nigerian man for illegally transporting nearly 4kg of meth, in line with the 2015 Criminal Code.
Before the arrest, Ekwegbalu James Nzube, 45, stayed at Hoa Hong Hotel in To Ky street, Trung My Tay ward, District 12, Ho Chi Minh City.
According to the indictment, the man was caught illegally entering Vietnam from Cambodia by border guards at border marker No. 170/3 in Loi Thuan commune, Ben Cau district, Tay Ninh province, at 20:00 on 30 July 2020.
Four packages containing nearly 4kg of white crystals, later confirmed as meth, were found in his luggage.
James Nzube confessed that he was hired by another Nigerian man, named Johe, with 2,000 USD to transport drug from Cambodia to Vietnam.
James Nzube entered HCM City via Tan Son Nhat airport on 13 March 2020 and stayed at Hoa Hong Hotel.