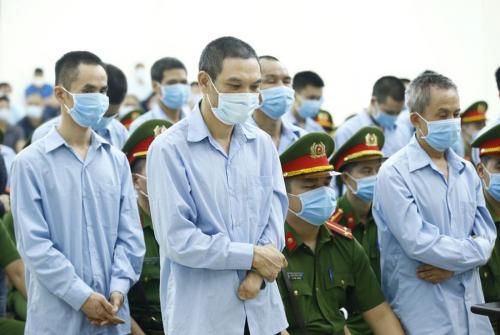 A Vietnamese court sentenced two brothers to death and handed prison terms or probation to 27 others on 14 September 2020, for their roles in the high-profile killings of three policemen in a clash over land rights, the security ministry and a lawyer said.
Le Dinh Cong and Le Dinh Chuc were charged with murder and resisting law enforcement before their tightly guarded trial. Twenty-seven others received punishments ranging from probation to 16 years or life imprisonment.
The brothers' father, Le Dinh Kinh, 83, was shot dead by police during the January clash at Dong Tam, a small rice-farming community next to a military air base, where authorities attempted to build a wall that the villagers said encroached on their land.
Land disputes are a longstanding issue in Vietnam, where rows over who has the legal right to build on land, most of which the state owns, can often spill into protests.
The Dong Tam dispute has yet to be resolved. It came to a head on 8 January, when police shot and killed Kinh, a village elder and retired local official. Villagers said police raided the village and killed Kinh in his bedroom.
Vietnam's Ministry of Public Security said the three policemen were burnt to death by villagers armed with hand grenades, petrol bombs, knives and bricks in a pre-planned attack.
A ministry statement after the verdict said the defendants' acts were "extremely dangerous for society and seriously violated legitimate state activities".
Lawyer Ha Huy Son told Reuters that of the two sentenced to death, Chuc had pleaded guilty but brother Cong denied the charges and would appeal.
"The case still has some unresolved issues, including how exactly the policemen were killed," Son added.