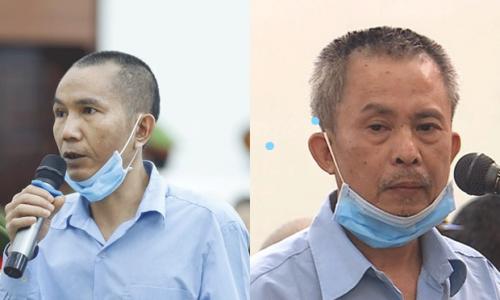 Two Vietnamese land-rights activists facing the death penalty after being convicted for their roles in a deadly clash with police last year at the Dong Tam commune outside Hanoi are refusing to ask for amnesty in the case, saying the move would amount to a confession of their guilt, Radio Free Asia reported on 29 March 2021.
Le Dinh Chuc and Le Dinh Cong, who were sentenced to death on 14 September 2020, had been urged by prison officials to appeal directly to Vietnam’s president for amnesty, which would have seen their sentences reduced to life terms, Cong’s daughter-in-law Nguyen Thi Duyen told RFA at the weekend.
“Both my father and my uncle [Le Dinh Chuc] said that prison officers had advised them many times to submit a request for amnesty, but that they had refused to do so,” Duyen said, following a 26 March visit with family members to the Hanoi Police Detention Center No. 2.
Duyen said that Chuc told family members an application for amnesty would mean an admission of guilt in the case.
“Uncle Chuc said that our family members should not cry or grieve, as he and my father-in-law would declare their innocence until the end,” she said.
On 9 March, an appellate court in Hanoi upheld the sentences conferred on 14 September 2020 by a lower court on six land-rights activists involved in the deadly clash at Dong Tam commune, including the death sentences imposed on Cong and Chuc. In the 9 January 2020 early-morning raid on the village by 3,000 security officers intervening in a long-running dispute over a military construction site about 25 miles south of the capital, Hanoi, village elder Le Dinh Kinh, 84, and three police officers were killed.