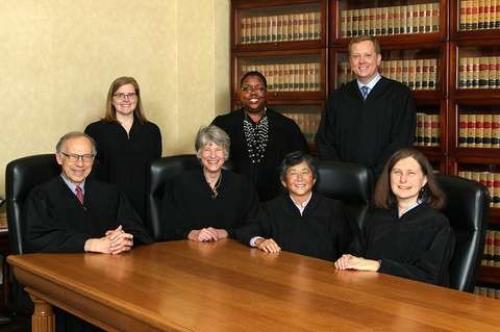 Supreme Court Overturns Death Sentence in Decision that Could Clear the State’s Entire Death Row
In a decision that advocates say could clear the state’s death row, the Oregon Supreme Court has overturned death-row prisoner David Ray Bartol’s death sentence because the crime he committed is no longer statutorily eligible for the death penalty.
In 2019, the Oregon state legislature passed a new law that narrowly limits the crimes for which the death penalty may be imposed. The court on October 7, 2021 held without dissent that Bartol’s sentence violated the prohibition on “disproportionate punishments” contained in Article I, section 16 of the Oregon Constitution because his offense had been reclassified as non-capital.
In her opinion for the court, Justice Rebecca Duncan wrote: “The enactment of SB 1013 [the new law] reflects a legislative determination that, regardless of when it was committed, the conduct that had constituted ‘aggravated murder’ does not fall within the narrow category of conduct for which the death penalty is appropriate. Given that determination, we conclude that, although the legislature did not make SB 1013 retroactive as to sentences imposed before its effective date, maintaining defendant’s death sentence would violate Article I, section 16.”
Duncan said that while the legislature was tasked with “establishing penalties for criminal statutory violations, it is the role of the courts to give effect to the constitutional proportionality requirement—by setting aside punishments that, under prevailing societal standards, are disproportionate to the offenses for which they are imposed.” The legislature’s judgment as to what constituted “the worst of the worst” murders and what did not, the court said, made clear that Bartol’s conduct was no longer considered appropriate for the death penalty.
“My expectation is that every death sentence that is currently in place will be overturned as a result of this,” Jeffrey Ellis, co-director of the Oregon Capital Resource Center, told Oregon Public Broadcasting.
The 2019 legislation, SB 1013, reclassified all crimes that were previously death-eligible as “murder in the first degree” and classified a new, much narrower, set of crimes as “aggravated murder” punishable by death. The new law restricts the death penalty to cases involving acts of terrorism in which two or more people are killed, premeditated murders of children aged thirteen or younger, prison murders committed by those already incarcerated for aggravated murder, and premeditated murders of police or correctional officers. Bartol and everyone else on the state’s death row were convicted under the prior law and could not be sentenced to death for the same crimes today.
In reversing Bartol’s death sentence, the Oregon Supreme Court relied heavily on the concept of “evolving standards of decency,” a standard set by the U.S. Supreme Court for determining whether a punishment violates the Eighth Amendment to the U.S. Constitution. The Connecticut Supreme Court also relied on that concept in 2015 when it struck down the death sentences of everyone on the state’s death row after the state legislature’s prospective abolition of the death penalty in 2012.
“Like the Eighth Amendment’s proportionality requirement, Article I, section 16’s proportionality requirement must be interpreted based on current societal standards,” the Oregon Supreme Court wrote. “It is not static; it evolves as societal standards change. When determining whether a punishment is disproportionate, courts apply the standards that currently prevail.” The court found that SB 1013 provided strong evidence that the death penalty was no longer considered acceptable for the crimes that were reclassified as first-degree murder.
The court also emphasized the arbitrariness of SB 1013’s lack of retroactivity. “Under SB 1013, whether a person who committed conduct that was previously classified as ‘aggravated murder’ but is now classified as ‘murder in the first degree’ can be sentenced to death depends on the person’s sentencing date, not on the relative gravity of the conduct,” Justice Duncan wrote. “SB 1013 creates a proportionality problem: It allows the execution of persons whose conduct the legislature has determined is not the worst of the worst and whose culpability is no different from those who cannot be executed. Under SB 1013, persons who engage in exactly the same conduct, at exactly the same time, can receive uniquely different sentences: one cannot be executed, but the other one can, even though the legislature has determined that the conduct is not the type for which death sentences can be imposed.”
The court also noted that, “whenever a state’s laws have changed so that persons with existing death sentences would not be eligible for the death penalty if they were sentenced under the new law, those persons have not been executed.” In New Mexico and Connecticut, the state legislatures repealed the death penalty prospectively, but the respective state supreme courts later overturned the death sentences of the people on death row. In New Hampshire, the death penalty was prospectively repealed in 2019, and one person remains on the state’s death row.