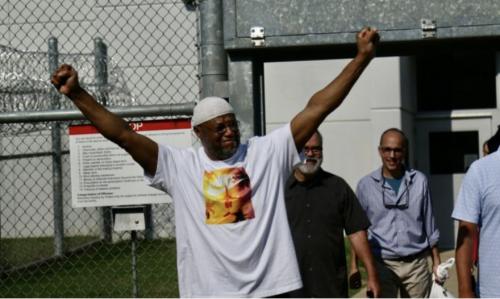 Sherwood Brown Exonerated, 186th Death-Row Exoneration Since 1973.
The DPIC released the news on September 30th, bur Brown was released on August 24.
Brown, now 53, Black, has been exonerated of the charges that sent him to death row in Mississippi in 1995.
On August 24, 2021, DeSoto County Circuit Court Judge Jimmy McClure granted a prosecution motion to dismiss charges against Brown (pictured after his release), who was released later that day after having spent 26 years on the state’s death row or facing the prospects of a capital retrial.
“We are extremely thankful to see Sherwood walk out of prison a free man,” said John R. Lane, a principal at the law firm, Fish & Richardson, which represented Brown pro bono. “After all of this time, we never lost hope, and are gratified justice has finally been served.” Brown also was represented pro bono by co-counsel from the Mississippi Innocence Project and the law firm Weil, Gotshal & Manges.
Brown was sentenced to death for the murder of 13-year-old Evangela Boyd and received two life sentences for the murders of her mother and grandmother. His convictions and death sentence rested in substantial part on false expert forensic testimony, as well as and the perjured testimony of a jailhouse informant who claimed that Brown had confessed to the murders. Prosecutors had argued that blood that was found on the sole of one of Brown’s shoes came from the victims and two forensic bitemark analysts falsely claimed that a cut on Brown’s wrist was a bitemark that matched the girl’s bite pattern.
DNA evidence later showed that bloody footprints in and around the murder scene contained only female DNA and the blood spot on Brown’s shoe contained only male DNA. DNA testing on a swab of Boyd’s saliva did not contain Brown’s DNA, refuting the claim that she had bitten Brown. DNA tests on the sexual assault kit collected during the autopsy found no DNA from Brown but showed that Evangela Boyd’s pubic hair and her bra contained DNA from unidentified males. A forensic scientist from the Mississippi Crime Laboratory found that none of the hair evidence recovered from the clothing and bodies of the victims had any microscopic characteristics similar to Brown’s hair and a crime lab fingerprint analyst found that none of the fingerprints found at the scene belonged to Brown.
Brown is the 100th African-American in the U.S. since 1973 to be exonerated from a wrongful capital conviction and death sentence. According to data maintained by the Death Penalty Information Center, 186 men and women who had been sentenced to death pursuant to wrongful convictions have now been exonerated, seven in Mississippi. Brown is the third former Mississippi death-row prisoner exonerated in the past year. Curtis Flowers was exonerated on September 4, 2020, and Eddie Lee Howard was exonerated January 8, 2021.
The Mississippi Supreme Court overturned Brown’s conviction and death sentence in October 2016. Despite the exculpatory DNA evidence, Brown remained in custody as prosecutors tried to build another case against him. Over the course of three years, four more laboratories tested the DNA evidence and came back with the same results while Brown remained in county prison facing possible capital retrial. Finally, after the years of extra DNA testing, the prosecution indicated that it had no intent to reprosecute Brown and moved to dismiss the charges against him.