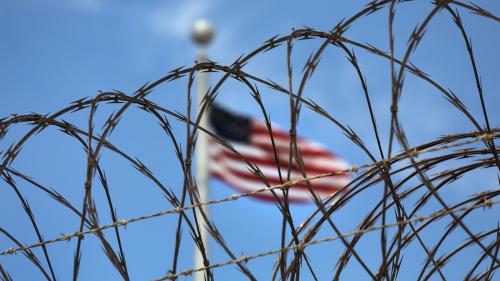 As U.S. taxpayers pick up a tab of more than $6 billion and climbing, former top officials involved in the military commission death-penalty cases against Guantánamo Bay detainees have blasted the military tribunals for waste, mismanagement, and ineffectiveness. NPR reported on the 18th anniversary of the 9/11 attacks that retired Air Force Col. Gary Brown, the former legal adviser to the head of Guantánamo’s military commissions, has filed a whistleblower complaint against the Guantánamo Bay military court and detention facility alleging “gross financial waste” and “gross mismanagement.” Morris Davis, Guantánamo’s chief prosecutor from 2005 to 2007, told NPR “there have been billions of dollars spent on Guantánamo that were totally unnecessary” and criticized the military commissions as “an overwhelming failure.”
A September 16, 2019 report by the New York Times, in conjunction with the Pulitzer Center on Crisis Reporting, disclosed that the Guantánamo Bay prison and military tribunals cost taxpayers “about $13 million for each of the 40 prisoners being held there” or a total of $540 million in 2018 alone. Though offering no solution to the problem, President Donald Trump said on September 18 that the $13 million per detainee annual cost to run Guantánamo was “crazy.” “It costs a fortune to operate, and I think it’s crazy,” Trump said.
Currently, eight Guantánamo prisoners have been charged with terrorism or war crimes, and six of those face possible death sentences. The death-penalty cases have long been beset with controversy. The pretrial proceedings in the capital trial of Abd al-Rahim al-Nashiri, accused of masterminding the bombing of the U.S. warship USS Cole, ground to a halt after the entire civil defense team resigned amid charges that the military was illegally eavesdropping on privileged attorney-client meetings. A federal appeals court later threw out several years of pretrial court orders in the case when the military judge then presiding in the case failed to disclose that his application to the Justice Department to become an immigration judge was pending while he was ruling on motions involving Justice Department prosecutors in the military commission case.
Davis says he quit as Guantánamo’s chief prosecutor in 2007 after being pressured by superiors to use evidence that had been obtained through years of torture in CIA black sites. A military commission judge later barred prosecutors from using statements the accused 9/11 plotters made to the FBI after having been tortured.
Brown’s whistleblower complaint alleged that he and Harvey Rishikof, then the convening authority of the military commissions, were fired from their positions in February 2018 because they were negotiating plea deals to secure convictions in exchange for dropping the death penalty against Khalid Sheikh Mohammed and the other four detainees charged in the 9/11 attacks. They and defense lawyers have been sharply critical of the enormous cost of the Guantánamo proceedings.
NPR reports that U.S. operations at Guantánamo have cost a total of $6 billion since the U.S. began using the detention center in 2002. “There have been billions of dollars spent on Guantánamo that were totally unnecessary,” Davis said. Michel Paradis, a Guantánamo defense lawyer representing Al-Nashiri, said “[i]t’s a horrible waste of money. It’s a catastrophic waste of money.… No matter if you want to see all of these guys shot in the street or whether or not you think Guantánamo itself is an aberration that should have closed yesterday — whatever your goal is, the military commissions have failed to achieve that goal.”
Brown said that the plea deals would not only have saved money, but “would’ve brought closure to the victims’ family members, which was our primary concern, and it would have potentially brought some closure to the wound that Guantánamo is to U.S. national security.” The deal also would have ended the lengthy and costly legal process, he said: the 9/11 defendants have been at Guantánamo since 2003, and their trials have yet to begin. “They haven’t been successful. They’ve stalled. They’re incredibly expensive,” Brown said. “Instead, wouldn’t it be better if we just said, ‘You know what? They didn’t work this time.’”
“October 3 will be the 12-year anniversary of the day I resigned,” Davis said, “and if you look at what’s happened over the last 12 years, I think you could sum it up as ‘not much.’ What I wish they would have done was to move these cases into federal court, where they would have been wrapped up years ago and saved the taxpayers a lot of money.” Cheryl Bormann, an attorney for Walid bin Attash, who is accused of training 9/11 attackers, said of the military commissions, “This is ridiculous. There’s no reason for it. We could secure these men until they died at much less cost and make sure that nobody was ever hurt again.”
The drawn-out legal process has also taken a toll on those whose loved ones were killed on 9/11. Glenn Morgan lost his father, Richard Morgan, and has traveled to Guantánamo twice to watch the military court process. While he said he would prefer that the accused conspirators be executed, he said a plea deal would at least bring some closure. “I’m not saying I advocate for it, but when someone in your family is killed like this and your mom is left to fight cancer on her own without her husband, your definition of satisfied is modified,” he said. “So I would be satisfied because there would be conclusion. I don’t want there to be no conclusion.” He said he worried that “the prisoners will die before they are found guilty,” leaving him feeling cheated of finality. “They would have not have been found guilty,” he said. “They’ll never have been found guilty of murder, and they killed over 2,900 people. And so that would be an injustice.”