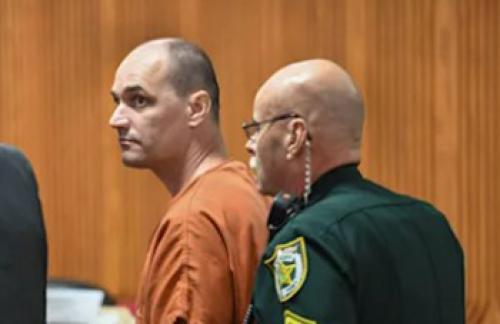 Circuit Judge William Roby Monday April 18, 2022, at the St. Lucie County Courthouse in Fort Pierce re-sentenced Richard Allen Johnson to life in prison. Killer of Vero Beach waitress in 2001 spared a death sentence, ordered back to prison for life. Richard Allen Johnson will spend the rest of his life in prison for the brutal 2001 murder and rape of Tammy Hagin a judge ruled Monday. Johnson, 44, White, was ordered to serve the life term after spending more than a dozen years on Florida’s death row following a 2004 trial in which a jury convicted him of murdering the 35-year-old single mother of 2 children then dumping her body in the Savannas State Park where it was discovered by police. The same jury later voted 11-1 in recommending a sentence of death, which a judge imposed. He is 1 of 6 death penalty cases from the Treasure Coast returned to court for a sentencing do-over after rulings by the U.S. Supreme Court and the Florida Supreme Court invalidated death sentences that followed less-than-unanimous jury recommendations. The state’s revised death penalty law, enacted in 2018, requires a jury to reach a unanimous decision in recommending death. Appearing in court Monday wearing orange jail garb and chained at the arms, waist and legs, Johnson appeared unfazed as Circuit Judge William Roby ordered him to return to prison for life. The new sentence was imposed a month after a prosecutor announced the state would no longer seek the death penalty for Johnson, who was convicted of killing Hagin on Feb. 15, 2001 during what was described at trial as an alcohol-induced rage. Hagin’s relatives elected not to attend the hearing, Assistant State Attorney Brian Workman said after court. He said prosecutors consulted with Hagin’s mother and brother before the state decided not to seek the death penalty again. Specifically, as part of an agreement with the state, Johnson was ordered to serve two consecutive life prison terms for convictions of first-degree murder and sexual battery with great force; Roby imposed an additional term of 30 years for a kidnapping conviction. Johnson also agreed to give up his right to appeal his punishment. In a statement released after the hearing, Johnson's court-appointed attorney Antony P. Ryan said his client "is not the same person he was 21 years ago." "He is sorry for everything he did then and he knows he bears responsibility for Tammy Hagin’s murder," Ryan stated. "He regrets everyday the loss of Ms. Hagin’s life and the terrible impact it has had on her family."