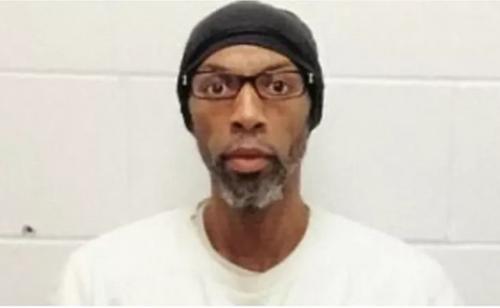 Dustin Higgs was executed by lethal injection at the Federal Correctional Complex in Terre Haute, Indiana, and was pronounced dead at 1:23 a.m. EST on January 16.

The Trump administration executed Dustin Higgs, 48, early Saturday morning, shortly after the Supreme Court lifted a stay from a lower court.
The government killed Higgs with a lethal injection of pentobarbital, over objections by his lawyers that lung damage from his recent bout of COVID-19 could make the execution extraordinarily painful. They had asked that the execution be delayed until his lungs recovered.
Higgs was pronounced dead at 1:23 a.m. EST at the federal prison in Terre Haute, Indiana.
He was the 13th person executed under President Donald Trump’s unprecedented execution spree, and the third to die during Trump’s final week in office. Lisa Montgomery, who was the only woman on federal death row, was killed on Wednesday morning, and Corey Johnson, who had an intellectual disability and was also recovering from COVID-19, was put to death on Thursday. The final two executions took place after Trump was impeached, for the second time, for inciting violent rioters to storm the U.S. Capitol.
One-third of the justices on the Supreme Court — which has repeatedly overturned decisions by lower courts to halt executions — were appointed by Trump. The decision to allow Higgs’s execution to proceed came down to a 6-3 split, with the liberal justices opposing the move.
Higgs, who is Black, was executed just four days before the inauguration of President-elect Joe Biden, who has said he will work to end the death penalty. Until the very end of his life, Higgs maintained his innocence.
In the months leading up to his execution, Higgs’s lawyers filed a flurry of appeals in an attempt to spare his life.
In December, he contracted COVID-19, as the virus swept through the prison complex in Terre Haute, where death row is located. At one point, the penitentiary had more cases of COVID-19 than any other federal prison in the country.
Higgs and Corey Johnson, who was also sick with the coronavirus, sued to stop their executions, arguing that recent lung damage from COVID-19 made it more likely they would feel excruciating pain during the execution.
When individuals are injected with a lethal amount of pentobarbital, it can cause pulmonary edema ― a condition in which fluid enters the lungs while the person is still conscious — inducing a painful sensation similar to suffocating or drowning. Medical experts have warned that receiving an overdose of pentobarbital would likely be even more painful for individuals recovering from COVID-19 because the virus often damages the lungs.
Both men received stays of execution earlier this week after a federal judge found those concerns credible. But higher courts overruled those decisions, allowing the executions to go forward.
A separate class-action lawsuit filed by two prisoners at Terre Haute — who are not on death row — sought to stop the executions on the grounds that holding such large gatherings at the prison complex risked their lives by potentially exposing them to COVID-19.
The men asked for all executions to be halted until the pandemic was over or until they had been vaccinated. A federal judge ruled that the Bureau of Prisons could continue with the executions as long as staff followed COVID-19 protocols, such as wearing masks. But during Johnson’s execution on Thursday night, witnesses reported that two people working the execution did not wear a mask the entire time they were in the chamber.
On Friday, the two non-death row prisoners asked a judge to stop Higgs’s execution or ban the staffers who had removed their masks from participating, arguing the government had violated the court’s order. In response, the government admitted masks came off but claimed it was briefly so staffers could communicate clearly. The government argued it wasn’t a violation of the court’s order because the order did not explicitly define “mask requirements.”
The judge sided with the government and allowed Higgs’s execution to proceed as planned.
Higgs, 48, Black, was sentenced to death on October 26, 2000 for his role in the January 1996 murders of three women in Maryland. 19-year-old Tamika Black, 21-year-old Tanji Jackson, and 23-year-old Mishann Chinn, were all shot and killed at a federal wildlife center (Patuxent Wildlife Research Center), in Maryland. Because the murders occurred on the Patuxent Research Refuge, which is classed as federal land, Higgs was tried by the federal government rather than by the state of Maryland.
The main controversy surrounding Higgs's case is that Higgs did not personally kill any of the three victims. The man who fatally shot all three women to death, Willis Mark Haynes, was sentenced to life without parole plus 45 years, while Higgs, who remained in a vehicle when the killings took place, received a death sentence. The prosecution argues that although Higgs did not kill anyone, he was the ringleader, and not only ordered Haynes to kill the women but bullied him into it.
Higgs and Haynes were tried separately in 2000. A third man, Victor Gloria, pleaded guilty to being an accessory-after-the-fact to the killings, a charge that only carried a maximum penalty of fifteen years in prison.
Gloria cut a deal however and in exchange for his testimony against Higgs and Haynes on November 22, 2000, he was sentenced to seven years. His testimony was the main piece of evidence used in Higgs's trial. Gloria was released on February 4, 2006.
In his final statement, Higgs was calm but defiant, mentioning the victims by name. “I’d like to say I am an innocent man,” he said. “I did not order the murders.”

Higgs becomes the 13th person executed by the federal system under the Trump administration, the 16th executed by the federal government since it resumed executions in 2001, the 3rd person executed this year in the United States, and the No. 1,532 since the United States reintroduced the death penalty in 1976 and resumed executions in 1977.