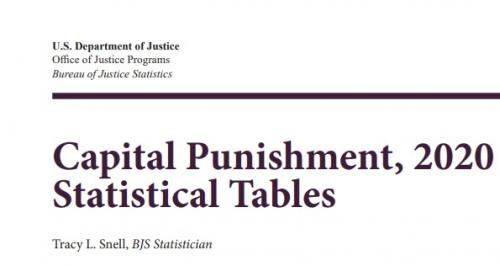 Capital Punishment, 2020
Statistics: Death Row Below 2,500 First Time in 29 Years After 20 Consecutive Years of Decline, Average Time on Death Row Reaches 19.4 Years
The number of people under sentence of death in the United States has fallen below 2,500 for the 1st time in 29 years following 20 consecutive years of decline, according to the U.S. Department of Justice Bureau of Justice Statistics (BJS).
In a new report, Capital Punishment, 2020 – Statistical Tables, released December 10, 2021, BJS says that 2,469 people were under sentence of death in the custody of 28 states and the federal government as of December 31, 2020, down 3.7% from the 2,563 BJS now says were on death row at the end of 2019. The total marked the 1st time fewer than 2,500 people were under sentence of death in the United States since the end of 1991, when BJS reported 2,465 people were imprisoned on the nation’s death rows.
The BJS data indicates that the size of U.S. death row peaked at 3,601 in its year-end measurements in December 2000 and has fallen every year since. The 1,132 fewer people now imprisoned on death row marks a decline of 31.4%.
While the number of people under sentence of death continues to drop, the average duration of their death-row imprisonment prior to exoneration, resentencing, death, or execution continues to rise. BJS reports that the average amount of time a prisoner has been incarcerated pursuant to their latest death sentence is now 19.4 years. That figure is calculated from the date of a prisoner’s latest death sentence and does not take into consideration the time nearly 10% of those on death row had previously been imprisoned pursuant to unconstitutional capital convictions or death sentences that had been overturned in the courts. More than 1/2 of the prisoners currently on death row (1,245, or 50.4%) were sentenced to death in 2000 or earlier.
For the 17 prisoners executed in 2020, the average time elapsed between the imposition of their most recent death sentence and their execution was 227 months, or 18.9 years. That was the 4th longest average time lapse between sentence and execution since executions resumed in the U.S. in 1977. Nonetheless it represented a decline of more than three years from the 264-month duration between latest sentence and execution for the 22 people executed in 2019.
The report provided continuing evidence of the aging of death row. The average and median age of prisoners on death row at the end of 2020 was 52 years, up from 51 at the end of 2019. Nearly 1/4 of death-row prisoners (597, 24.2%) were age 60 or older, up from 22.4% at the end of 2019. In December 2000, the average and median age of death-row prisoners was 38 years and only 2.7% of death-row prisoners had reached age 60.