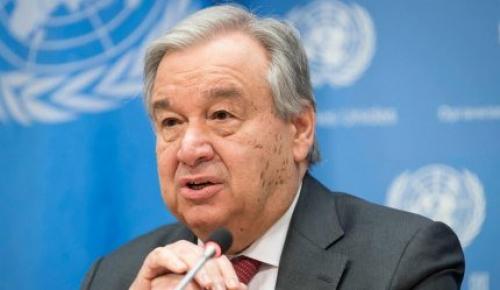 UN Secretary-General Antonio Guterres on 16 June 2020 expressed his concern about the death sentences issued against journalists by a Houthi court in Sanaa.
“I am horrified that these individuals were tortured and deprived of their basic human rights,” said Antonio Guterres, stressing that the UN does not accept the death penalty in any circumstances.
He went on to urge the Houthis to revoke the death sentences issues against the journalists and to release them along with other detained media workers.
“The killing of journalist Nabil Hassan Al-Quaiti in Aden suburb on 2 June 2020, is another tragic example of the high risks journalists face in Yemen to do their job. Since the outbreak of the conflict in 2015, when more than thirty journalists have been killed in Yemen, media workers continue to face relentless harassment, threats and defamation campaigns in blatant disregard of human rights law,” he continued.
“I and the United Nations system as a whole, including my Special Envoy to Yemen, will continue to call on all parties to guarantee freedom of expression and the right to information, protect the primary role of the independent media, and call for the release of detainees in line with their obligations under human rights law,” added Guterres.
Guterres emphasised that all parties to the conflict must take measures to protect journalists and media workers and respect the right to access information.
He stressed the importance of enhancing the safety of journalists and combating impunity for those who attack them.
In April, a court run by the Houthis sentenced four journalists to death for “treason” and espionage. The four were identified as Abdel-Khaleq Amran, Akram Al-Walidi, Hareth Hamid and Tawfiq Al-Mansouri.