UGANDA PRESIDENT: NO DEATH PENALTY FOR GAYS AND NO 'HOMOSEXUAL PROPAGANDA' 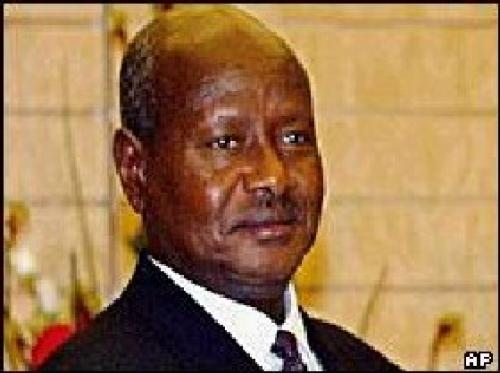 Uganda President Yoweri Museveni has spoken out against the controversial death penalty addition to an anti-homosexuality bill currently being debated by the parliament, but has insisted that "homosexual propaganda" will not be tolerated in the African country.
"I have been telling these people (pro gay activists) that nobody will kill or prosecute them for being homosexual, but there should be no promotion of homosexuality," Museveni said at the St. Paul's Cathedral in the capital Kampala, according to AllAfrica.com.
"I told him I have never held rallies to even promote heterosexual issues," Museveni said about a meeting with the U.S. ambassador to Uganda. "The problem is promoting, you hear people holding conferences to promote homosexuality as if it's a good thing," the president added, with Christians listening to his remarks reportedly chanting "Amen."
The proposed death penalty provision for people caught engaging in homosexual acts has caused outrage from around the world, with the U.S. and other Western countries threatening to cut funding to Uganda unless it reconsiders its anti-homosexuality laws. Museveni explained, however, that people see things very differently in his country, and that attitudes in the West toward sex do not match the controversial views of Africans.
"I told him that I have been married to my wife for 39 years, but I have never kissed her in public and in my house before the children. If I did it I would lose elections and you know I am not about to accept that idea of losing elections," the Ugandan leader continued.
Conflicting reports from Uganda have emerged on the status of the anti-homosexuality bill, with the government set to decide on the legislation somewhere before the New Year. Parliament leaders have spoken out in recent weeks, insisting that capital punishment will get cut from the final bill, which has been debated on for years.
Saddleback Church megachurch pastor Rick Warren, whose work fighting AIDS has taken him around Africa and has given him the opportunity to visit and speak in Uganda many times, posted in December a Twitter message reading: "An unjust law in Uganda is back in the news. I opposed it 3 (years) ago and I still do."
In his statement three years ago, Warren said that it was his duty to speak out on moral issues, and described the Uganda bill as "unjust, extreme and un-Christian toward homosexuals."