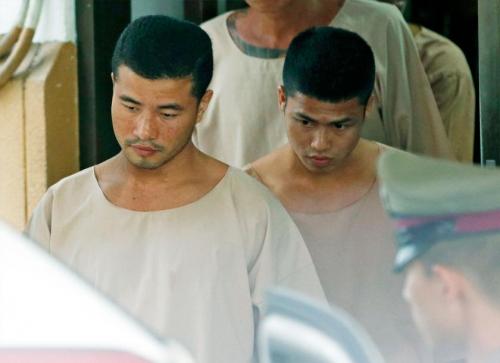 Thailand's Supreme Court on 29 August 2019 upheld the conviction of two Myanmar migrants sentenced to death for the murder of two British backpackers on a resort island in 2014.
Wai Phyo and Zaw Lin have denied killing David Miller and raping and killing Hannah Witheridge. Their battered bodies were found on the morning of 15 September 2014, on a beach on the island of Koh Tao in the Gulf of Thailand.
Lawyers for the two convicted men had claimed the evidence in the case was mishandled and that they made confessions under duress that they later retracted, raising questions about police competence and the judicial system in Thailand.
The court dismissed allegations of physical mistreatment and mishandling of forensic evidence, saying the forensic work was handled by respectable institutions and it found no proof of torture.
The two Myanmar men, both 22 at the time, were employed as service workers on the island, which is famous for its diving locations.
The Thai lawyer for the defendants contended they were provided with inadequate translators when talking to police, in addition to being physically abused into making confessions.