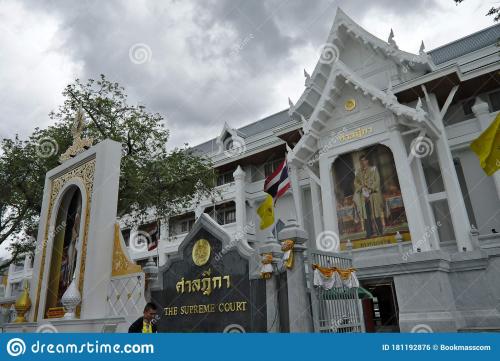 The Supreme Court of Thailand

The Supreme Court on 3 March 2021 decreed the death penalty for six men convicted of a string of bombings and attempted bombings in central Pattani in 2016.
Facing the death sentence are Ibrohim Yosoh, Amri Lueyoh, Santi Chatharakul, Ayub Paolee, Isamae Tuyong and Noroning Nordeh.
They were among 10 people convicted of charges relating to bombings and attempted bombings in six incidents which occurred in downtown Pattani from June to December 2016.
The other four were Masun Salae, Abdulloh Hayee-uma, Hamid Jehma and Rusran Wahayee.
The Supreme Court sentenced Masun, Abdulloh and Rusran to life imprisonment and Hamid to 36 years and eight months in jail.
The six offences include planting a bomb near the central mosque in central Pattani on 3 July 2016 and the explosion at a noodle stall in the market on Pipit Road on 24 October that year.
The explosion killed one person dead and injured 20 others.
The 10 men were also found guilty for their roles in bombing two fishing trawlers in Muang district on 18 June 2016 and setting off a bomb at the JP furniture store in downtown Pattani the following day.
All, except Ayub, were arrested in December 2016. Ayub was caught by the security forces on 2 March 2017.
The Supreme Court passed the death sentence after upholding the guilty ruling of the lower court.
According to the court, the men were convicted due to strong evidence and testimony provided by key witnesses.
Two men were found to have possessed a firearm and acquired materials and equipment for assembling bombs.
Apart from the bombing and attempted bombing charges, the men were also charged with illegal assembly to commit a crime and colluding to amass firearms for the purpose of acts of terrorism.