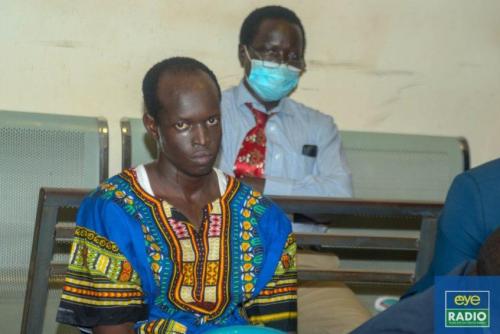 Babu Emmanuel Lokiri, the young man accused of killing the three siblings at Rock City in Juba on 1st August 2020, was hanged on 7 January 2022 afternoon in Juba. This was confirmed to Eye Radio by Ogwili Kuot, the President of the High Court in Juba.
Babu was first condemned by the court to death in August 2020 after the court discovered that he slaughtered the three children. Babu, 24, was found guilty of the gruesome killing of 9-year-old Naomi, 7-year-old Blessing and 4-year old Nor Edward.
Judge Kuot says Babu was killed after all the court procedures were completed that mandated his hanging.
“Emmanuel Babo Lokiri was hanged today 7th January 2022 at around 2:00 PM”, Judge Ogwili Kuot told Eye Radio.
“The process was done according to the prison procedures. Nobody is hanged without approval from the President of the Republic”, he added.
According to Article 206, premeditated murder is considered if the act that caused the death was committed with the intention of causing the death or if the perpetrator of the act knew that the death was a probable result rather than merely a possible result of an act or any bodily harm that was intended to cause it with the same act.
Babu used a machete to end the lives, the court heard. The murders angered South Sudanese all over the world, including President Salva Kiir who promised to ensure that the killer faced justice.