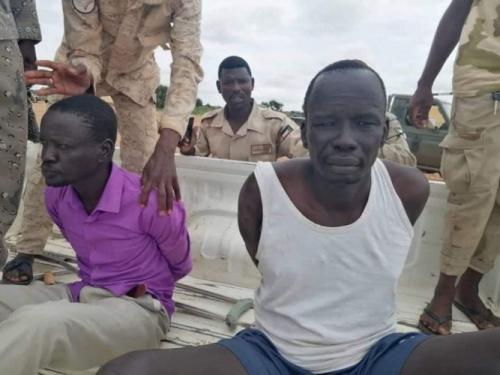 South Sudanese rebels before their executions, on 7 August 2022

South Sudan on 8 August 2022 executed rebel officers who were forcefully deported by authorities in Sudan, according to a video and pictures Sudan Tribune obtained after the execution.
Sudanese authorities on 7 August handed over rebel officers arrested in Al-Fula town in West Kordofan State.
The three officers were identified as Major Gen. Nyuon Garang, Major Gen. Pur Ruop Kuol, and Brig. Gen. Gatluak Majok were reportedly transported by road through Heglig and handed over to Unity State governor, Joseph Nguen Monytuil on 8 August morning.
“Monytuil immediately ordered the execution”, relatives and multiple sources told Sudan Tribune the same day.
Sudan and South Sudanese have remained tight-lipped over the matter.
Stephen Buoy Rolnyang, the leader of the rebel South Sudan People’s Movement/Army (SSPM/A) confirmed the execution of the officers, saying the act violates humanitarian and international laws.
“It is true we have lost our colleagues. The authorities in Sudan as we reported yesterday in our release arrested and drove through Heglig our colleagues and handed them over to Joseph Nguen Manytuil, the governor of Unity State. The latter was on phone with Presidential Adviser Tut Gatluak Manime, who was coordinating the arrest and deportation with the Sudanese authorities”, said Rolnyang.
“They were arrested in Al- Fula where they were visiting family members by members of Sudan’s Rapid Support Force, put into a vehicle and handed over to Joseph Nguen who waiting for them at the border,” he added.
The three officers, Rolnyang said, were executed at Kaikang in Unity State.
He wondered why the unarmed officers were not taken to the country’s capital, Juba for legal processes to be followed and the nature of crimes determined.
He said that their execution was expected once they were given to the Unity State governor.
“They are vengeful. Blame the Sudanese [and] no one else,” he emphasized.
The rebel leader expressed disappointment over Khartoum’s move, saying many rebel groups exist in Sudan and South Sudan, yet neither country had ever arrested and handed over officers to be summarily executed.