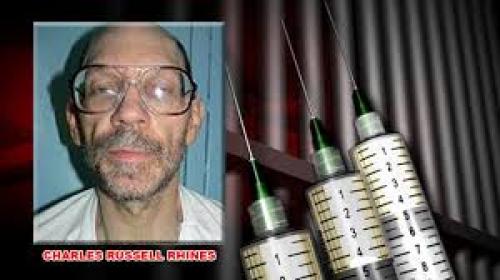 Charles Russell Rhines, now 63, White, was put to death on 4 November 2019. Rhines confessed he stabbed 22-year-old Donnivan Schaefer (White) on March 8, 1992 when Schaefer surprised him while he was burglarizing a Rapid City doughnut shop where Schaeffer worked. Rhines had been fired a few weeks earlier. Rhines died at 7:39 p.m. in the South Dakota State Penitentiary in Sioux Falls. He was initially scheduled to be executed at 1:30 p.m. Monday, but multiple last-minute appeals delayed his time of death by about 6 hours. Media witnesses said Rhines used his last words to tell Ed and Peggy Schaeffer, parents of victim, that “I forgive you for your anger and hatred towards me.” Media witnesses to the execution said Rhines appeared calm, and it took only about a minute for the pentobarbital used by the state to take effect. They said when he finished speaking, he closed his eyes, then blinked, breathed heavily and died. Rhines had challenged the state's use of pentobarbital, arguing it wasn't the ultra-fast-acting drug he was entitled to. A circuit judge ruled it was as fast or faster than other drugs when used in lethal doses and speculated that Rhines wanted only to delay his execution. The U.S. Supreme Court rejected that appeal, as well as his arguments that he was sentenced to die by a jury with an anti-gay bias and that he wasn't given access to experts who could have examined him for cognitive and psychiatric impairments. After the 1993 trial, several members of the jury came forward and admitted that Rhines sexual orientation played a significant role in their deliberations.
One said that the jury knew that “he was a homosexual and thought that he shouldn’t be able to spend his life with men in prison.” Another recalled a fellow juror’s statement that “if he’s gay, we’d be sending him where he wants to go if we voted for” life imprisonment. A third juror recalled “lots of discussion of homosexuality. There was a lot of disgust.” In the afternoon, about 30 protesters gathered in snow flurries outside the state prison where Rhines was to be executed, praying and singing hymns. Denny Davis, director of South Dakotans for Alternatives to the Death Penalty, said they accept Rhines' execution but hope to steer public opinion against capital punishment. "It is about a culture shift and changing the values of people," he said. "Why would we want to put this person to death when society is already safe?" Rhines becomes the 1st person to be executed this year in South Dakota, the 5th overall since the state resumed capital punishment in 2007, the 18th this year in the US, and the  1,508th person executed in the United States since 1977.