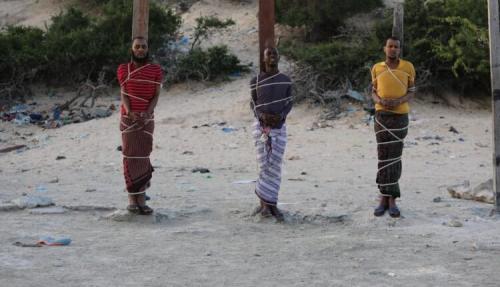 Three al-Shabaab lieutenants were on 29 November 2020 morning executed by firing squad ordered by a military court-martial.
The three including Mohamed Haji Ahmed Ilkacase, a college teacher who ran an assassination operation in Mogadishu, had been found guilty on 26 November.
Ilkaase, Said Salim and Ahmed Mohamed Hashim Arab, all aged 27, were found guilty of being members of al-Shabab and assassinations. The men had been held at a detention centre in Mogadishu since 31 December 2019.
Ilkaase, the college lecturer who worked closely with al-Shabaab, was the head of operations in the Mogadishu and Benadir region, targeting leaders and people seen as spies against the group.
They were executed by firing squad on Sunday morning, the Attorney General of the Somali military court, Abdullahi Bule Kamey, told reporters.
"The members were found to be behind a series of assassinations in Mogadishu against government officials and senior army officers," General Abdullahi Bule said.
"Mohamed Haji Ahmed was found guilty for the murder of police corporal Mohamed Omar Sheikh Osman, 24 February 2017; the assassination of military General Abdullahi Mohamed Sheikh Qururuh, killed 24 September 2017; the assassination of Somali deputy attorney general Mohamed Abdirahman Mohamud on 20 February 2019; and the assassination of police General Mohamud Haji Alow on 27 April 2019," he added.