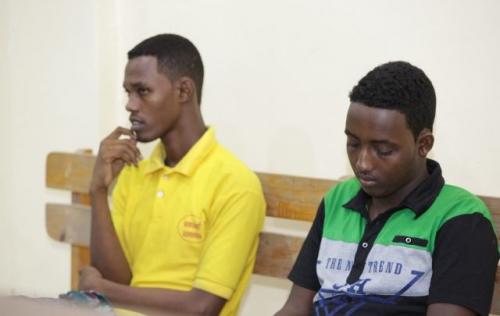 A military appeals court in Mogadishu upheld the death sentence against two Al-Shabaab militants, one of whom was involved in the Hotel Sahafi attack, that claimed 32 lives last November. The Military Supreme Court quashed attempts by Osman Abukar Omar Asad and his co-accused Ali Borow Adan Abdihakin, to overturn the ruling by the court on March 20, 2019.
The court declared the offences committed by Mr. Asad (21 years old) from Middle Shabelle and Mr. Abdihakin (25) from Baidoa, warranted the firing squad. According to the ruling, Asad confessed to being a member of the militant group Al-Shabaab and had participated in several terrorist attacks in the capital Mogadishu.
The court established that Asad was behind the deadly bombings at Hotel Sahafi on November 9, 2018, which killed 32 people and injured 69 others. Four huge bombs went off in intervals of about 15 minutes within Hotel Sahafi area in KM4 in Mogadishu, leaving in its wake death and massive destruction of property.
Mr. Asad, the court established drove into a car ferrying a family killing one and injuring five others in Hodan district in Mogadishu on August 15, 2018. He was also behind another attack along Via Roma in Hamar-weyne district, where two people were killed.
The 21-year-old man was first arrested on November 22, 2018, while getting off from bombs-laden vehicle in Daljirka Dahsoon area in Mogadishu. The first car had just exploded killing two teachers from Yasin Osman School in Mogadishu.