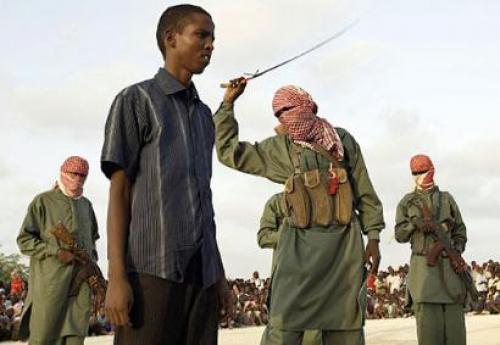 Reports that reached Radio Dalsan from Bakol region say that Al-Shabab has beheaded three people in the area. Names of the beheaded individuals are yet to be identified but some locals said that they were well known local elders.
The incident was reported to have happened in Abal village which is located in the outskirts of Hudur town in Bakol where there was a fight between Alshabab and militia loyal to Muktar Robow Abu Mansoor who was once a powerful Alshabab deputy leader. At least 12 people including Mukhtar Robow's son were killed in the fight.
The criminals who carried out the heinous act moved out of the area and bodies of the deceased were collected from the area by members of their families and relatives.
Alshabab and the militia loyal to Robow fought several times at Abal area but so far no leader in the South West State administration who spoke about the issue.