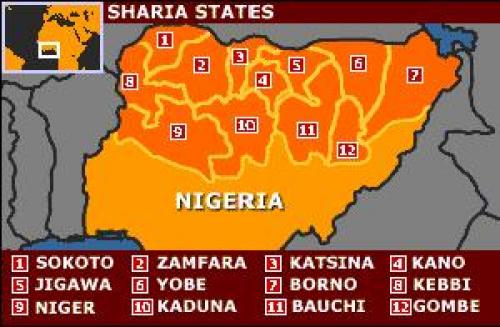 a Sharia court in Nigeria's north-eastern Bauchi State has sentenced a man to death for raping two teenage girls, local press reports say.
"For your action, you will be stoned to death as ordained by Allah," presiding judge Aliyu Mohammad told Ade Debo after he confessed to the crime.
The court said Debo, 23, connived with fellow herdsman Shagari Abubakar to force the girls to have sex with them.
But Abubakar got off with a lighter six-month sentence for assisting Debo.
Both men have 30 days to appeal against the sentences, after which the local state governor will confirm them.
Bauchi is one of 12 states in mostly Muslim northern Nigeria that have introduced Sharia punishments for criminal offences in recent years.
Sharia courts impose strict Islamic laws, including floggings and amputations for crimes like theft.
The introduction of Sharia punishments has been highly controversial, provoking international concern abroad and sparking religious violence within Nigeria.
More than a dozen Nigerian Muslims have been sentenced to death by stoning for sexual offences ranging from adultery to homosexuality since the Sharia legal system was introduced in 2000.
But none of these death sentences has actually been carried out.
They have either been thrown out on appeal or commuted to prison terms as a result of pressure from human rights groups.
Many others have been sentenced to flogging for drinking alcohol.
But there have been two amputations in north-western Zamfara State which pioneered the introduction of the Islamic legal system in the country.