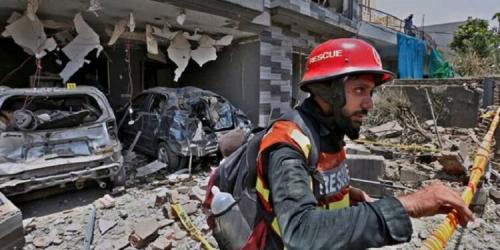 A pakistani anti-terrorism court on 12 January 2022 sentenced four men to death for their involvement in a car bombing last year that killed four people near the residence of Jamat ud-Dawa (JuD) chief Hafiz Saeed in Johar Town.
The court also served up a five-year jail term for a woman, Ayesha Gul, convicted of facilitating the attack in Lahore, according to a statement released by the Counter-Terrorism Department of Punjab police.
All five of the convicted — including the four men convicted of murder — were arrested after the 23 June attack near the residence of Saeed.
The men include Peter Paul, Eid Gul, Zia Ullah and Sajjad Hussain.
In 2020, an anti-terrorism court sentenced Saeed to 15 years in prison in a terror-financing case.
He was serving his term under house arrest under a government order and he escaped the bombing attack unharmed. Four bystanders were killed.