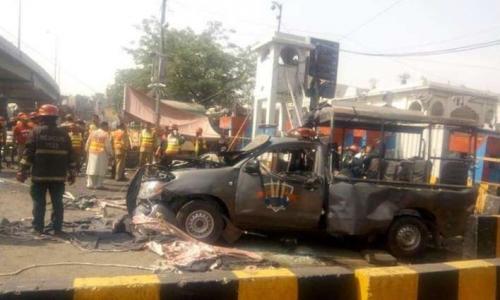 An anti-terrorism court (ATC) on 28 November 2019 handed down death penalty on 22 counts to a facilitator involved in Data Darbar suicide blast case.
Mohsin Khan has been awarded death penalty on 22 counts under Section 302 (b) of PPC and Section 7 of Anti-Terrorism Act, besides a fine of Rs 100,000 for each commission of murder.
The court awarded life imprisonment to the convict under Section 6 of Explosive Substances Act and seven years imprisonment on 24 counts with a fine of Rs 500,000 to each injured, under Section 324 of PPC, whereas he would undergo six months additional punishment in case of default.
According to prosecution, Mohsin Khan was a resident of Shabqadar in Charsadda district and he was arrested during a raid at his hideout in Bhatti Gate by the Counter-Terrorism department.
The convict facilitated the suicide bomber - Siddique Ullah. They both entered in Pakistan through Torkham on 6 May 2019.
The convict was a member of a banned outfit and explosive material was also recovered from him at the time of arrest.
It is pertinent to mention that Data Darbar suicide blast claimed at least 13 lives, including five police officials and a security guard, on 8 May 2019.