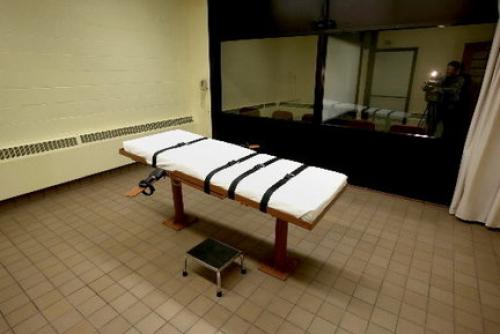 Jonathan Mann against the death penalty: “Death penalty does more harm than good for victim’s son. I lost my father two years ago to a brutal and senseless murder. The man who took his life, Thomas Knuff, was recently sentenced to death. Knuff took my dad from me and robbed the two of us of invaluable time together. It’s impossible to describe the depths of my pain or how to cope with what’s happened to me, but I know that Knuff’s death sentence will not provide healing to me. As someone with a very close connection to the death penalty, I appreciate Ohio House Speaker Larry Householder’s recent comments about his waning support of the death penalty. It may be surprising to hear that I am opposed to the death penalty given that I lost a loved one to such brutality. However, when you look at how the death penalty impacts victims’ families, it makes complete sense. My father was killed more than 2 years ago, and Knuff was just sentenced to death. Still, our journey with his case is only just beginning. Because the death penalty is irreversible and a life is on the line, the U.S. Supreme Court has mandated a complex process. These procedures are attempts to reduce the risk of mistakes — given that more than 165 innocent people have been released from death rows, I’d say they are more than necessary. But this is torturous to families like mine who become trapped in legal limbo. It’s typical that capital cases can take upward of 15 years to weave through the system, which means constantly reopening the wound of my father’s death at hearings and appeals. Though nothing will ever fully heal the pain of losing my father, it would certainly be easier for me to focus on my grief and healing without being ensnared in this process. This complex process does more than divert the attention of families like mine trapped in the system. It also diverts millions of dollars that could instead benefit all victims. Speaker Householder is right to mention cost as one of the reasons he’s losing support for the death penalty. Every dollar we pour into the death penalty is a dollar we aren’t investing in services for victims or helping to stop violent crime from occurring initially. A study of Summit County examined initial trial costs of 2 aggravated murder cases in 2017, one with a death specification and one without. Both defendants were tried around the same time, but the result was that the county spent 10 times more on the death case than the nondeath case. The legislature has never done an in-depth cost analysis of the death penalty. If these are the numbers for just one county, I can’t imagine what the numbers for the entire state would be. All this money, and Ohio has nothing to show for it. A common misconception is that the death penalty system acts as a deterrent, preventing future murders. However, studies have shown repeatedly that it really makes no difference statistically whether a state has a death penalty or not. The death penalty shifts attention and resources from people who really need it: the victims’ families. Instead of spending money on a death sentence, the state needs to discuss and fund ways for people like me to heal. I’m very fortunate to have a job with wonderful insurance and a great support system of family and friends. But this isn’t just about me. There were 103 homicides just in Columbus in 2018, and most survivors might not be as fortunate as me. They shouldn’t be forced to go through this impossible healing process without specialized grief counseling or ongoing support. In some respects, we were “lucky.” For families in unsolved murders there is the added pain of never learning what happened to their loved ones. We need to prioritize cold cases. With the death penalty on the books countless law enforcement hours are spent chasing a handful of executions instead of solving more cases. This leaves offenders on the streets and victims’ families aching for answers. Our state has tunnel vision toward ending a life and not focusing on those whose lives continue. This has to change. I’m hopeful to see leaders like Speaker Householder state their waning support for this system. I’m confident that the state will start to see the harm the death penalty does to victims’ families and will realize the time and resources spent on seeking death could be better used to improve the lives left behind after such a devastating loss.”