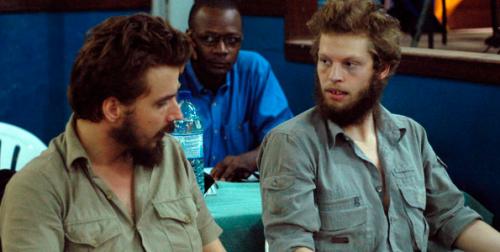 Tjostolv Moland (l) and Joshua French at the trial in Kisangani

The Democratic Republic of Congo government has given assurances that two Norwegians sentenced to death for murder and spying would not be executed, Norway's foreign ministry said.
Foreign Minister Jonas Gahr Stoere received assurances from his Congo counterpart Alexis Thambwe Mwamba in a telephone conversation, the ministry said in a statement.
"He assured Mr Stoere that the two men would not under any circumstances be executed even if the verdict is upheld," it said.
"The Congolese government has adopted a moratorium on the death penalty and capital punishment is no longer applied in the country," it said.
Tjostolv Moland, 28, and Joshua French, 27 -- both former soldiers -- were convicted on September 8 by a military court in the Congo city of Kisangani for killing their driver on May 5.
The two, who were in Kisangani either as tourists or on business depending on varying reports, have said their driver was killed by bandits.
Norway has denounced the death sentence.
The two were also found guilty of illegal arms possession and armed robbery. One of the pair was also found guilty of the attempted murder of two other people.
"Minister Mwamba also said the Democratic Republic of Congo would be open to a discussion on the possibility of serving part of the (final) sentence in Norway," the Norwegian statement said.
Oslo has rejected the allegations of spying, for which it has been ordered by the court to pay 60 million dollars in reparations. "I reiterated that the two Norwegian have no ties to the Norwegian authorities," Stoere said.
According to Norwegian television TV2 Nyhetskanalen, the two men lodged an appeal on September 8.
Stoere added that he had agreed to meet with his Congolese counterpart on the sidelines of the UN General Assembly this month in New York, and recalled that Congolese authorities were responsible for the safety of the two men.