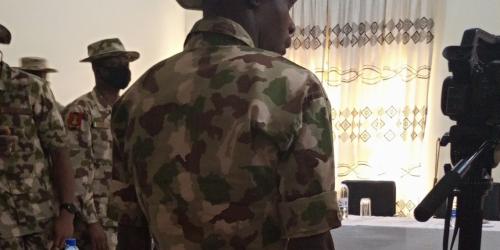 A Nigeria Army General Court Martial on 12 January 2021 sentenced a soldier, Azunna Mmaduabuchi, to death by firing squad for killing an officer.
Mr Maduabuchi had in July 2020 reportedly opened fire on one Lieutenant Babankaka Ngorgi which killed him instantly.
The trial that led to the conviction of the condemned did not reveal if the soldier had any personal grudges with the officer he killed.
Mr Maduabuchi, a private soldier, pleaded guilty but argued that his action was accidental.
But PREMIUM TIMES was informed by inside military sources that the condemned soldier had once gone on AWOL which led to the stoppage of his salary for about six months.
The source said the soldier, who was serving at the 202-battalion in Bama, pleaded with the late Lieutenant Ngorgi, who was his Adjutant, to allow him travel to the state capital to sort out his salary issues, but his requests were repeatedly denied.
It was not certain if it was the issue that pitched the condemned soldier against the deceased officer.
Eight prosecution witnesses told the court-martial headed by Arikpo Ekubi, as president of the court, that they saw the condemned soldier at the scene of the crime still holding the AK47 rifle while the late Adjutant lay in a pool of his blood.
One of the PWs said he saw the private soldier match past him, without complimenting him as his senior as he walked up to the deceased adjutant who was at that time making a call and summarily opened fire on him.
“After opening a rapid action fire on him, the soldier turned to face me and then raised his hands to say” I have killed him”, the PW said.
The condemned soldier, according to the court-martial, failed to provide a convincing defence in his testimony.
“The accused person gave a conflicting narration of what happened, the President of the Court Martial said while ruling on the case.
“In his written statement the soldier said his rifle went off while he was passing by the deceased officer. And while asked in court to demonstrate how he was carrying his rifle, he told the court that the rifle went off while he was fetching water to drink.”
The court contended that rifles only respond to what it is asked to do.
The court-martial said Mr Mmaduabuchi deliberately killed the officer because he ran straight to the Adjutant after returning from a patrol and opened fire on him at close range.
“He held his rifle at rapid-fire and emptied nine rounds of ammunition on the deceased officer, N/16439 who was the Adjutant of 202 battalions,” the Court-Martial President said.
“The act of murder is a heinous crime against humanity; it offends the tenets of military regimentation and professionalism, You betrayed the truth and confidence reposed in you by the Nigerian army to show dignity and respect for human life.”
Barring all pleas for leniency by the defence counsel, the court-martial insisted that the act of murder has a mandatory punishment as clearly stipulated in Section 106 of the Armed Forces Act.
“On this note, the sentence of this court-martial on you, 16NA/75/1343, Trooper Azunna Mmaduabuchi, for the offence of murder is to suffer death as provided in section 106 of the Armed Forces Act. And this sentence is to be carried out by firing squad.,” the President of the Court-Martial ruled.