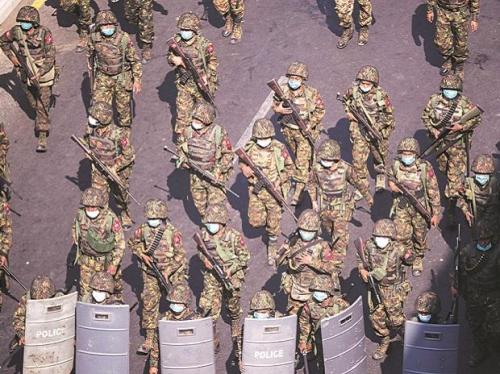 Myanmar soldiers during the protest in the country

Amid growing violence in Myanmar following the 1st February coup, the ruling military on 16 March imposed a death penalty as a possible punishment for treason, dissent, and other offenses against the government.
As part of its martial law order, the State Administration Council of the military, set up following the forceful takeover, said it would also assume the administration of Yangon's courts, reported Kyodo News.
Amid its growing attempts to quell growing protests against the coup, the junta said it would impose harsh sentences, including lengthy prison terms or even death, for offenses including treason and dissent, obstructing the military or civil service, spreading false news and incitement of fear, according to local media.
The offenses are among 23 categories of crimes that the order says are subject to court-martial with no appeals allowed for decisions or convictions.
However, an application to reverse a death sentence could be made to Senior General Min Aung Hlaing, chairman of the State Administration Council, within 15 days of a conviction, the order said.
Martial law was declared in two Yangon townships, Hlaingthaya and the neighboring township of Shwepyithar, on 14 March after the military opened fire on anti-coup demonstrators, killing at least 38 people, followed by orders in four more townships in Yangon on 15 March.