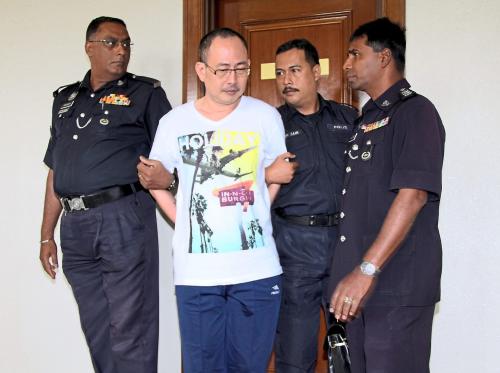 The Court of Appeal in Putrajaya on 16 October 2019 upheld the death sentence of tow truck driver Koong Swee Kwan for murdering Arab-Malaysian Bank (AmBank) founder Hussain Ahmad Najadi.
A three-member bench comprising Justices Yaacob Md Sam, Zabariah Mohd Yusof and P. Ravinthran also affirmed the 18-year jail term on Koong for attempting to murder Najadi’s wife Cheong Mei Kuen, 55.
In unanimously dismissing Koong’s appeal against his conviction and sentence for both charges, Justice Yaacob, who led the bench, ruled that evidence was overwhelming against Koong.
“We find his conviction on the two charges was safe, ” he said.
Koong, 50, known as Sei Ngan Chai (which means bespectacled in Cantonese) was sentenced to death on 27 Oct 2017, for killing Najadi, 75, after a retrial of his case.
He was also sentenced to 18 years’ jail for attempting to murder Cheong.
Koong was charged with committing the offences in the parking lot of the Kuan Yin Temple in Lorong Ceylon, Kuala Lumpur, between 1.30pm and 2pm on 29 July 2013.
On 5 September 2014, the Kuala Lumpur High Court judge Justice Mohd Azman Husin sentenced Koong to death for Najadi’s murder and also jailed him 18 years for the attempted murder.
Koong has one more tier of appeal to the Federal Court.