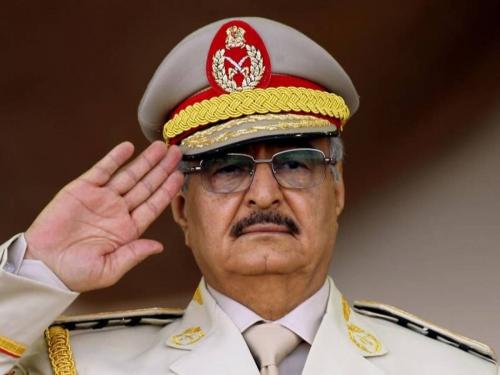 The permanent court-martial in Misurata sentenced in absentia on 25 November 2021 Khalifa Haftar to death for bombing Misurata Air Defense College in 2019 and causing the killing of one Libyan Army soldier after strikes by a military plane under the command of Haftar’s forces.
The Military Prosecutor Office in Misurata said the death sentence also included Abdelrazik Al-Nathori, Saqr Al-Jeroushi, Abdelsalam Al-Hassi and other pro-Haftar commanders, adding that the sentence deprives those commanders and Haftar of their civil rights and releases them from military duty.
Meanwhile, the Military Prosecutor called earlier in a new official order by Deputy Prosecutor Mohammed Gharouda to Criminal Investigation Apparatus to execute a previous order to arrest Haftar over five cases and violations to military laws in 2019 and 2020.
“Haftar is a Libyan Army officer and submitted his presidential candidacy at the High National Elections Commission, thus the law says any military officer who meets with political parties or joins a political entity or election campaign is subject to no more than five years of imprisonment”, he said.
73 candidates were listed by the High National Elections Commission on 24 November as preliminary potential candidates to take on the race for the 24 December, including Haftar, HoR Speaker Aqila Saleh, and current Prime Minister Abdul-Hamid Dbeibah, while 25 others were disqualified, including Saif Al-Islam Gaddafi and Nuri Abu Sahmain.