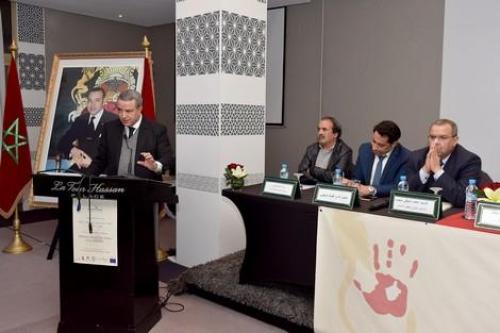 Meeting of the Moroccan Coalition Against the Death Penalty

The Moroccan Coalition Against the Death Penalty has reiterated its call to the government to remove the death penalty from the country’s Penal Code.
During a meeting with his general assembly on 18 January 2019 in Rabat in the presence of justice minister Mohamed Aujjar, the coalition’s coordinator, Abderrahim El Jamii, stressed the need to“fight” for human rights and abolish the death penalty.
El Jamii urged Aujjar to join the Moroccans calling for abolition, while emphasizing that the minister’s attendance at the meeting gave hope and opened a new “political and human rights chapter.”
El Jamii, on behalf of the coalition, pointed out the incompatibility between Article 20 of the Constitution, which guarantees the right to life to all human beings and the Penal Code, which allows the death penalty.
For his part, Aujjar revealed that the state is gradually showing an inclination toward ending the death penalty.
“Morocco is not far from joining the growing global initiatives to abolish the death penalty,” he stated.