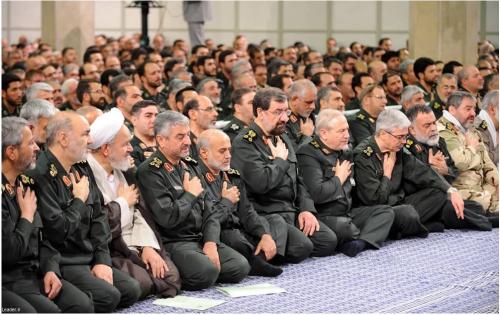 The IRGC’s Possible Terrorist Designation Frightens Iran’s Regime
On Thursday, the European Parliament passed a resolution calling for additional pressure on the Iranian regime, including the formal designation of its Revolutionary Guards (IRGC) as a terrorist organization. MEPs voted overwhelmingly in favor of that designation a day earlier, with only nine opposing it, against 598. The European Commission president, Ursula von der Leyen, also voiced explicit support for sanctioning and proscribing the IRGC as a terrorist organization, following multiple appeals from European Union member states such as Germany.
The EU is scheduled to impose a new package of sanctions on Monday, its fourth since nationwide protests against the clerical regime broke out across Iran in mid-September. Tehran has cracked down fiercely on those protests, killing more than 750 individuals, including at least 70 children, according to the People’s Mojahedin Organization of Iran. Western governments have predictably condemned the regime’s human rights abuses but have been avoiding any measures stronger or more confrontational than the usual economic sanctions or vocal condemnations.
The vast majority of protester deaths over the past 4 months can reportedly be attributed to the IRGC and its volunteer militia, the Basij. This is in keeping with reports from prior uprisings, including 1 in November 2019, when approximately 1,500 protesters were killed in mass shooting incidents across the country. That earlier crackdown came about 6 months after the United States added the IRGC to its list of foreign terrorist organizations, prompting new discussions of similar proposals in both the European Union and the United Kingdom.
Yet even three years after the mass killings of November 2019 and 4 months into Iran’s latest anti-government uprising, follow-through on those proposals remains uncertain. The British parliament held a debate on the topic last week, leading to reports of nearly universal support for IRGC terrorist designation. The government then signaled that it was taking the cross-party appeals into consideration, and various reports suggested that designation was forthcoming. But no formal announcement or timetable has yet been announced.
The situation is similar in the EU following the MEPs’ vote. Thursday’s resolution is non-binding, and so it remains to be determined whether the EU’s leadership will actually move to ban the IRGC and its affiliates throughout the Union. Nevertheless, the resolution and underlying political dialogue have been sufficient to terrify the ruling theocracy, which grapples with a domestic crisis.
Much of Thursday’s response came from the general staff of the regime’s armed forces, which coordinates between the army and the IRGC. Its comments consisted of some threats in the event that the EU does follow through on the threat of labeling the IRGC as a terrorist group and banning it accordingly.
According to the general staff, doing so would “affect regional and global security, tranquility and peace, and the European Parliament should be careful about its consequences.” Its statement also seemed to present justification for possible future actions in Europe. These threats, further indicate the necessity to rapidly proscribe the IRGC and increase pressure on the regime.
The regime’s threats have given the EU, its member states, and their allies substantial new justifications for formally recognizing the IRGC as a threat to global security and stability. If, however, the intention was more boastful than threatening, then the statement clearly indicates that Tehran expects the sanctions in question effectively cripple its hardline paramilitary organization.