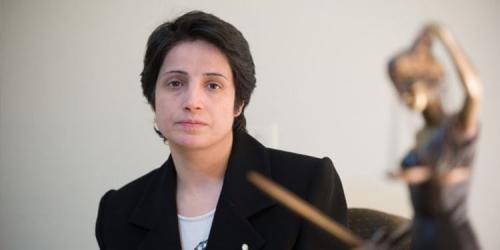 The German Judges Association has awarded its Human Rights Prize to the Iranian human rights lawyer Nasrin Sotoudeh who is currently on a hunger strike in Evin Prison in protest to the conditions of political prisoners.
Deutscher Richterbund (DRB, the German Association of Judges) is the largest professional association of judges and public prosecutors in Germany. Founded in 1909, today it brings together more than 15,000 members.
“Nasrin Sotoudeh has become a symbol of the Iranian civil rights movement through her courage and tireless commitment to human rights and the rule of law,” the presidents of the German Judges Association said on Wednesday.
Barbara Stockinger and Joachim Lüblinghoff stated that now more than ever, Ms. Sotoudeh needs wide international support, and that they wanted to honor her "highly impressive commitment in Iran and to bring her fate to the public attention".
The 57-year-old lawyer and rights activist began a hunger strike at Tehran's notorious Evin Prison on August 11 to protest the "unfair" and "illegal" conditions of political prisoners in Iran.
On Wednesday, Swedish Foreign Minister Ann Linde expressed deep concern about Sotoudeh's health and said she wanted to reiterate the EU's call for her sentence to be reviewed.
In a statement on August 28, the American PEN association called for the immediate release of Sotoudeh and other political prisoners, as well as an end to judicial and legal harassment of her and her family.
For the latest news on the Sotoudeh case, see HoC 7/27, 8/18, and 8/20/2020