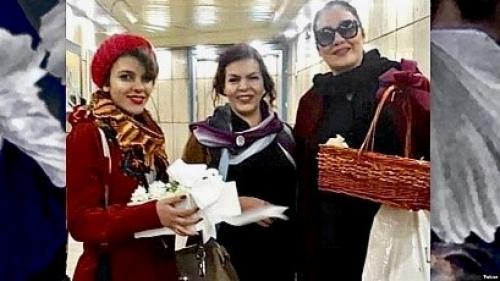 Sentences confirmed for three women's rights activists: Yasaman Aryani, Monireh Arabshahi and Mojan Keshavarz. A Court of Appeals of Tehran has upheld prison sentences of three women for defying the forced veiling laws but reduced it to a combined 31 years and seven months from an earlier total of 55 years and six months. According to Amir Raeesian who represents Monireh Arabshahi and her daughter Yasamin Ariany, the Court of Appeal issued its verdict in the absence of the accused and their lawyers "due to a Shiite public holiday" without even sending them a notice. Mr Raeesian who published the verdict of the Court of Appeals in a tweet on Wednesday said his clients will challenge the verdict. They want a retrial, he said. Monireh Arabshahi, her daughter Yasamin Ariany, and Mojgan Keshavarz were arrested in April 2019 for dropping their headscarves in Tehran underground and offering flowers to other women on March 8, 2019 on the occasion of the International Women's Day. They posted a video of their civil disobedience action against forced hijab on social media. The three women's rights activists who are held at the notorious Qarchak prison were charged with "assembly and collusion to act against national security," "propaganda against the regime," as well as "inciting and facilitating corruption and prostitution" through promoting "unveiling" of women.