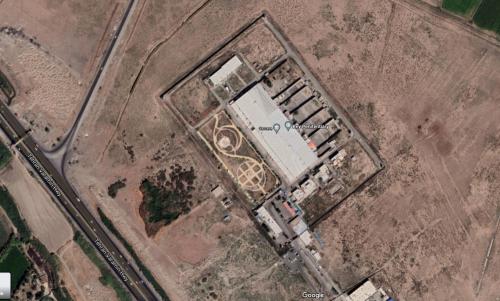 Qarchak Prison, a Nightmare for Women Prisoners in Iran
Located near Qarchak and Varamin, Qarchak Prison (also known as Shahr-e Ray Women’s Prison) is one of the Iranian regime’s most notorious prisons. It is located approximately 17 km from the Tehran-Varamin highway, outside of Qarchak city, creating great problems for families trying to get there to visit their loved ones.
Many women prisoners housed there refer to the prison as hell, Kahrizak II, and even, the apocalypse, for the poor conditions they face there.
The site was originally a poultry farm before it became a prison in the early 1970s. Following the Iranian revolution in 1979, the prison was closed and abandoned, with its inmates being sent elsewhere to serve their sentences. It wasn’t until 2003, that the prison underwent a brief reconstruction and became in use again, this time as a place for the rehabilitation of addicts.
In 2010, as the regime passed a prison expansion policy, the site was handed over to the Prisons Organization and became a prison once again, specifically to house female prisoners. The following year, several female political prisoners from Evin Prison were transported in groups to serve their sentences at Qarchak Prison.
On the prison site, the main building houses 10 wards, along with several solitary and quarantine cells, as well as a kitchen. In 2015, the site expanded, and a few more buildings were built to house a health clinic, a visiting center, and a kindergarten for the children of the prisoners.
Each ward within the prison has been allotted to different categories of prisoners to be grouped together, separate from the rest of the prison population. Wards one and two are for addicts, wards three and four houses those convicted of serious or dangerous crimes, wards five and six are for youths, and ward seven is reported to be allocated to non-smoking prisoners.
Known as the Ward of Mothers, ward eight has housed political prisoners since September 2020. Among the inmates housed here during their sentences were Athena Daemi, Golrokh Erayi, Maryam Akbari Monfared.
The final two wards, nine and ten, are known as counseling wards. Each of these wards has a capacity of fewer than 100 people, but they usually hold more than 200 inmates at any given time.
The site was never built to be a prison in the first place, so it lacks the necessary infrastructure and facilities for its population. As a result, the prisoners there are under dual pressure and are living in appalling conditions.
Following a case of several women detained in Qarchak Prison being brutally beaten by prison guards in June 2016, Amnesty International condemned the prison and demanded that the women imprisoned there to be released. This, along with the dire conditions inside the prison explains why it is also on the United States sanctions list for its human rights violations.
On December 7, 2021, the US Department of the Treasury sanctioned the Prison’s director, and the Prison itself. In a statement, it wrote, “Soghra Khodadadi, the current director of Qarchak Women’s Prison, was responsible for ordering and directly participating in a violent attack on December 13, 2020, against prisoners of conscience in Ward 8 along with at least 20 other guards. According to publicly available reports, prison guards beat these female prisoners of conscience with batons and stun guns. Khodadadi ordered this attack in retaliation for the prisoners exercising their right to freedom of expression.”