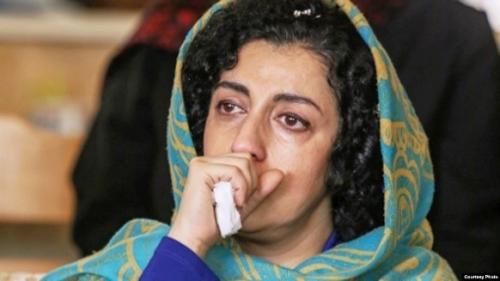 Pressure Increases On Narges Mohammadi, Prominent Rights Defender In Iran Prison. The Islamic Republic intelligence agents have tightened restrictions on a prominent Iranian human rights advocate as she begins her sixth year in prison. In a letter from jail, Ms. Narges Mohammadi tells the public that she is not even allowed to receive books behind bars. Mohammadi, who was transferred to a remote prison in the town of Zanjan last year despite her serious illness, says she is serving her sentence alongside inmates who were victims of "poverty, corruption, tyranny and the rule of patriarchal law." The "gift" I received for my sixth year in jail, Ms. Mohammadi asserts, is companionship with the victims whose fate "thrust pain into my bones ... to find out what a devastating end is in the waiting for a starving child who had stolen a box of cheese puff, and a prostitute who sold her body to avoid sleeping on the street at night.” The gift, Mohammadi has added, also made her understand that "denying women the right to divorce takes them to the gallows and the stoning pit." The Islamic Revolutionary Court has sentenced Narges Mohammadi, 48, to sixteen years in prison on charges of "propaganda activities against the regime", "campaigning for the abolition of the death penalty" and "conspiracy to commit crimes against the security of the country." In a recent letter to her mother, Mohammadi complained that the Judiciary had refused to give her leave amid the outbreak of deadly novel coronavirus (see HoC 30/03/2020). Earlier, Amnesty International (AI) had warned, "After years of imprisonment, Narges’ health is failing. She suffers from a blood clot in her lungs and a neurological disorder that means she is at risk if she contracts COVID-19."