IRAN - Open Letter of Iranian Attorneys on the Sotoudeh Case. 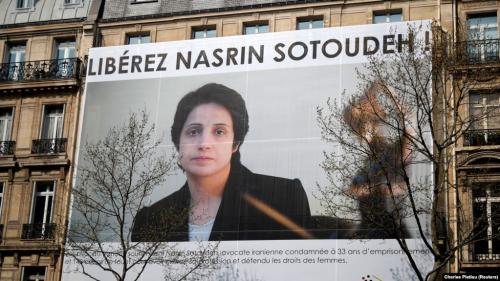 Open Letter of Iranian Attorneys on the Sotoudeh Case.
Forty-four lawyers in Iran have urged a prominent Iranian advocate of human rights, Ms. Nasrin Sotoudeh, and other political prisoners to end their hunger strikes and avoid endangering their own lives. The attorneys also demand the release of inmates amid the COVID pandemic. The attorneys say in an open letter that it is logical, humane, and legal to demand the release of political prisoners and other inmates. They have argued that amid a pandemic granting leave to prisoners is a sound request.
In a letter on August 11, the award-winning lawyer, Ms. Nasrin Sotoudeh had announced that she began a hunger strike. Sotoudeh had also gone on a hunger strike last March to protest unbearable conditions in Iran's prisons.
The widespread coronavirus outbreak in Iran and reports of political prisoners contracting the deadly virus have raised concerns over their safety.
As reported by Sotoudeh's lawyer, Mohammad Moghimi (also Moqimi), his client has decided to go on a hunger strike to protest the "unfair" and "illegal" condition of political prisoners in Iran, which has also become "worse" following the outbreak of the coronavirus.
The Atlas of Iranian Prisons also reports that following the outbreak of the coronavirus in Tehran's infamous Evin Prison, dozens of political prisoners in Ward 8 held a sit-in protest on Monday, August 10.
The website advocating prisoners' rights also said that "27 political prisoners participated in the sit-in protest and demanded an immediate investigation into the dire conditions at Evin."
"Ms. Sotoudeh and some of our oppressed compatriots in prison, who do not find a way to reclaim their rights as well as the rights of the people, have gone on a hunger strike as a last resort endangering their own lives," the lawyers said in a letter on Saturday, August 22, adding, "by risking their health, they seek to influence the authoritarian and extra-judicial behavior of the rulers and to convey their message to the people."
Sotoudeh represented many human rights activists, women's rights activists, victims of child abuse, and juvenile defenders on death row. She was previously jailed from August 2010 to September 2013 for her professional and human rights activities.
Last February, French President Macron personally invited Nasrin Sotoudeh, to participate in a G7 council for promoting human rights. "I am pleased to invite you to this initiative to advance real equality between women and men around the world," Macron wrote to Sotoudeh.
Sotoudeh's seat in the council in France was kept vacant and adorned with a bouquet while she was behind bars in Tehran's infamous Evin prison.
The letter from the lawyers, as well as the interventions of various NGOs based outside Iran, invite the international community to keep its guard on the Sotoudeh case, as a symbol of the struggle for human rights in Iran.