IRAN - Navid Afkari has been sentenced to death. 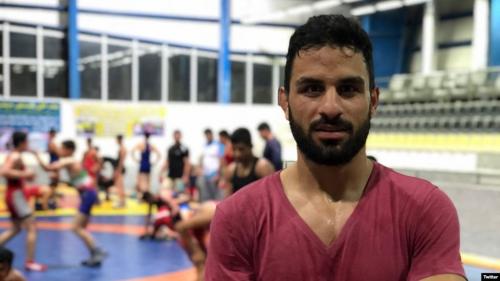 Navid Afkari has been sentenced to death. Human Rights Activists News Agency (HRANA) has reported that Navid Afkari, 27, was arrested with his two brothers Vahid and Habib on September 17, 2018. They have been charged with forming a group to act against the regime, killing a person said to be a plainclothes agent and actively participating in protests in Kazerun and Shiraz. Based on these charges, Navid has received two death sentences, six months of prison and seventy-four lashes. Navid Afkari is a plasterer and wrestler who has won several medals in domestic tournaments. In August 2018 when the national currency rial suddenly lost considerable value protesters took to the streets and chanted against the regime and officials in several cities including Shiraz, Rasht, Tehran, Mashhad, Ahwaz and Kermanshah. Many shops closed in the bazaars of some cities including Tehran in protest to the worsening economic situation and inflation. Protesters were attacked by security forces in several places who used tear gas and pepper spray. Hundreds were arrested during the protests. According to Iranian officials one protester and three police forces were killed during the disturbances. Not only the killing of the security forces but also the killing of a civilian was blamed on the protesters. Navid Afkari's brothers Vahid and Habib have been sentenced to fifty-four and twenty-seven years in prison respectively as well as seventy-four lashes each. According to HRANA Navid Afkari's death sentences have been confirmed by the Supreme Court, and Navid Afkari is in danger of execution. Navid Afkari was also tried for the same crime in the Revolutionary Court and sentenced to moharebeh (waging war against God), making it his second death sentence. Vahid was sentenced to 25 years in prison by the Revolutionary Court, with both the brothers’ cases being in the appeal stage. Iran Human Rights has obtained court rulings and documents showing that the evidence against them is weak and the heavy sentences were based on confessions taken under torture. The defendants’ chosen lawyers also resigned after being threatened by the judicial authorities and replaced by appointed lawyers. HRANA has also published an image of a letter from Afkari in which he says he was subjected to brutal torture – including covering his head with plastic bags and pouring alcohol in his nostrils -- to "confess" to fabricated statements on which the charges against him were then based. The disclosure of the death sentences passed on Navid Afkari has once again rekindled the social media anti-death penalty campaign.