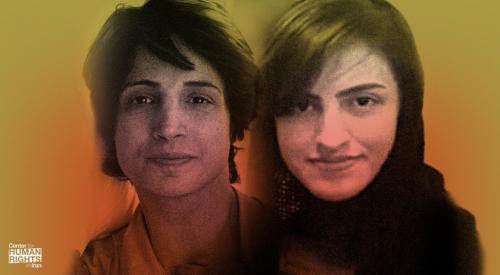 Nasrin Sotoudeh’s Daughter Detained, Persecution of Imprisoned Lawyer’s Family Intensifies. Mehraveh Khandan, the 20-year-old daughter of imprisoned human rights lawyer Nasrin Sotoudeh, was arrested at her home in Tehran on August 17, 2020, and detained in order to force her mother to end her hunger strike in Evin Prison, the Center for Human Rights in Iran (CHRI) has learned. She was arrested without prior notice on specious charges of “insult and assault” and subsequently released on bail. “The Iranian authorities haven’t been able to silence Nasrin Sotoudeh nor end her brave protest in prison, so now they’re going after her daughter,” said Hadi Ghaemi, CHRI executive director. “The international community should forcefully condemn this thuggish and unlawful behavior,” he added. CHRI calls on the authorities in Iran to immediately drop all charges against Mehraveh Khandan and to cease punishing the family of Nasrin Sotoudeh in order to silence her. The authorities also recently blocked the bank account of Nasrin Sotoudeh, cutting off funds for the family. “Nasrin said she was expecting the authorities would do something like this so she would drop her demands but she absolutely will not,” Sotoudeh’s husband, Reza Khandan, said in an interview with CHRI. In a phone call from Evin Prison, where Sotoudeh is serving a long prison sentence on sham national security changes, she said she would continue her hunger strike that began on August 11 to demand the release of political prisoners threatened by the COVID-19 virus. “Nasrin has become very weak and lost a significant amount of weight,” Khandan said. “Thursday night [August 13] she became very sick but she didn’t go to the clinic because of its condition and the COVID situation.” Twelve political prisoners recently tested positive for COVID-19 at Evin Prison’s Ward 8. Only one was hospitalized while the rest have not received proper medical care. Moreover, only 17 prisoners were tested, while many more have displayed symptoms. With no separation of ill prisoners, there is concern that many have contracted the virus. “There was no prior warrant or warning,” Khandan told CHRI. “All of a sudden five agents showed up today in two cars and a taxi … I thought they’ve come to arrest me but then I saw Mehraveh’s name on a folder and the agents said they had a warrant for her arrest. “I said on what charge? They said they were not obliged to tell me but did me a favor and said the arrest warrant is for insult and assault.” Khandan added that he went to the Evin Revolutionary Court, where his daughter was being formally charged, but was not allowed inside. One of his lawyers, Mostafa Nili, posted 100 million tomans ($23,729 USD) bail on her behalf and gained her release. According to Khandan, the charges against his daughter are in connection with an incident with a female prison guard a year ago. “There’s always tension in the visiting hall, especially in the area for face-to-face meetings,” he said. “The guards always harass [prisoners and visitors] about their clothes or object when we say hello to other prisoners or look at them. “The female guards are much more sensitive. Male guards give warnings or hurl insults once in a while but the female guards often interfere and scold you about every little thing. “So there’s always a lot of tension and it’s always their fault because they come close to the family tables and inevitably they will complain about something. “It was during one of these quarrels that one of the female guards felt insulted and lodged a complaint against Mehraveh. Even if the two got into a physical fight, which they did not, it should have been treated as a fight between two people, with warrants issued in advance followed by a trial. “The message is clear: Ms. Sotoudeh you must climb down”. “But astonishingly they sent a team of Intelligence Ministry and judiciary agents to raid the house and arrest Mehraveh. For what? A verbal argument between two people that happened a year ago? “The message is very clear: Ms. Sotoudeh you must climb down and stop your hunger strike. They want to put pressure on her and intimidate the family.” Khandan added that his daughter was previously banned from traveling abroad at the ages of 12 and 17. “As we go forward, these things will surface more often. Haven’t they done these things to the children in the past? Haven’t the children been growing up with their parents behind bars? “Still, we expect that in today’s world, the authorities will try to save what’s left of their lost dignity. But it’s amazing to see the authorities being so irrational and unwise, even against their own interests.” Sotoudeh began a hunger strike on August 11, 2020, to demand the release of political prisoners threatened by the COVID-19 virus, which has spread in Iran’s overcrowded and unhygienic prisons. UN experts have expressed great concern for Iran’s prisoners and have called for the release of all arbitrarily detained prisoners “before it is too late.” Nasrin Sotoudeh is currently behind bars at Evin Prison, sentenced to 38 years in prison for her peaceful work as a human rights attorney, 12 years of which she must serve before becoming eligible for parole. Among her charges were “encouraging prostitution” for advocating against compulsory hijab and defending citizens’ right to peaceful dissent.