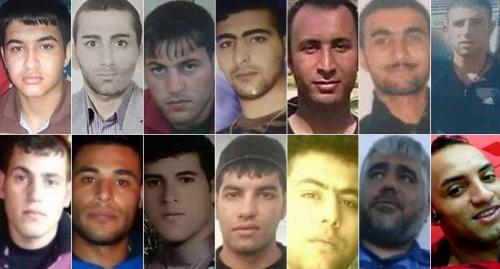 Names, Pictures of Prisoners Killed in Ahvaz Prison Riots.
Human rights sources have identified more prisoners killed by security forces in Ahvaz prison riots over fears of contracting the coronavirus.
The state security forces responded to the coronavirus-related rioting late March by firing live ammunition and tear gas.
According to prisoners’ relatives, dozens of prisoners were suffocated with teargas, burned to death during a prison riot over conditions, amid an outbreak of Covid-19.
The authorities have tried to cover up the real number of those killed. They have not yet provided accurate numbers of those killed.
The Intelligence Ministry branch in Ahvaz has warned the relatives of the victims of Sheiban and Sepidar prisons, against disclosing the cause of death of their loved ones. In order to prevent the news of the repression of the prisoners, the prison phone lines are cut off, and the prison officials do not respond to the families.
Amnesty International said it feared around 36 prisoners have been killed by Iranian regime enforcers attempting to suppress uprisings in at least eight prisons around the country.
The names of some of the victims are as follows:
- Sajjad Abiat, shot and wounded on March 30 in Sepidar Prison. He died in a hospital on April 15. He has been imprisoned since last year;
- Seyyed Reza Khorsani (Moghinami), 38;
- Mohammad Salamat;
- Amin Abiat;
- Shahin Zuhairi;
- Mohammad Lefteh;
- Ali Khafaji;
- Majid Zobidi;
- Naser Zobidi;
- Sajjad Pishdad;
- Alireza Hajivand;
- Majid Qeitasi, 25;
- Sorush Makvandi, suffocated with tear gas;
- Adel Naseri, 35; He was acquitted of a murder charge and was awaiting the outcome of the appeal. His family were told on April 6 that Nasser died for unknown reasons. His body was handed over to the family on April 8. When he was buried, his relatives found out that he had been hit in the head and face;
- Ali Zargani, 21 was killed on March 30. Prison authorities called his family 10 days later and told them to come pick up their son’s body;
- Mohammad Tamoli, 25, had been serving a seven-year-prison term;
- Faizullah Mokhtari was shot in the head. Suffocation is written as the cause on his death certificate.