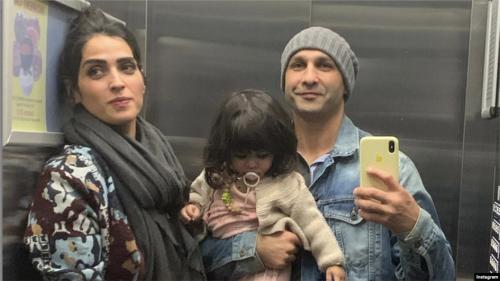 Iran Sentences A Popular Instagram Couple In Self-Exile To Jail, Lashes. A Revolutionary Court in Iran has sentenced a husband and wife who are among Iranian lifestyle and sports Instagram influencers to a total of 16 years in prison, 74 lashes and a cash fine. In a post on Instagram on April 29 Ahmad Moin-Shirazi who now lives in self-exile with his wife Shabnam Shahrokhi and two children said the court has issued a verdict against him and his wife in absentia on charges of "propaganda against the regime", "obscene and vulgar" social media posts, acting against public morals and propagating moral corruption. According to the posts that Mr. Moin-Shirazi and his wife have published on Instagram, the family had to leave Iran in September 2019 to live in self-exile in Turkey to avoid harassment. Mr. Moin-Shirazi says he and his wife were repeatedly summoned to the Intelligence Ministry, accused of espionage, warned about their social media activities, and even detained for a day before being freed on bail. The couple have nearly 1.5 million followers on their separate Instagram accounts combined. Mr. Moin-Shirazi – better known as Picasso Moin -- is a former world kickboxing champion and entrepreneur. He has been sentenced to 9 years in prison. He says his interrogators told him he could not post anything about his political views or even post photos in which his wife appeared without hijab (compulsory Islamic outfit). Ms. Shahrokhi has been sentenced to 7 years in prison, 74 lashes and 3 months of unpaid work for the municipality, also on account of her Instagram posts. She often posted photos of herself exercising or practicing kickboxing in the family apartment in Tehran, alone or with her husband. She also wrote about her pregnancy, her children and sometimes social or political issues and occasionally advertised baby products or ran ads for charities on her account. Iranian authorities often arrest non-conformist social media influencers on charges of corruption for posting their dance videos or not wearing the prescribed Islamic headscarf and long coat. Another Instagram influencer, the 22-year-old Sahar Tabar who is known for her creepy videos and heavily edited photos to cast herself as a zombie-like version of Angelina Jolie was arrested in October 2019 and is currently in prison. She was made to appear on the state-run television and "confess" to blasphemy. The confession presented her as an individual suffering from mental disorders.