IRAN - In what has been perceived as a victory for the social media campaign Supreme Court reconsiders death sentences for Saeed Tamjidi, Mohammad Rajabi and Amirhossein Moradi 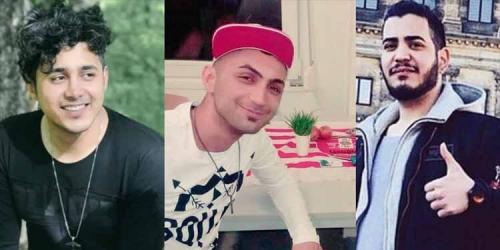 In what has been perceived as a victory for the social media campaign against capital punishment in Iran, the country’s Supreme Court has ruled to reconsider the death sentences issued for three young political activists.
The trio who are in their twenties are Saeed Tamjidi, Mohammad Rajabi and Amirhossein Moradi, who were arrested for taking part in the nationwide protests in November 2019 triggered by economic hardship but with strong anti-regime manifestations.
Last week, the Supreme Court had confirmed the death sentence issued by the Court of First Instance.
The move gave rise to one of the most widespread online campaigns in Iran as over 11 million Iranians promoted the hashtags “Don’t Execute” in Persian and “Stop Executions in Iran” in English.
The process of for carrying out execution stopped immediately after the Supreme Court’s ruling on Sunday July 19.
The defense lawyers of the three men said the Supreme Court has agreed to reconsider the case. Usually in similar cases, the Supreme Court sends the case to a lower court at equal standing with the first instance court to launch fresh investigations into the case.
Lawyers for Amirhossein Moradi, Mohammad Rajabi, and Saeed Tamjidi issued a joint statement, announcing that a request for retrial had been accepted by the Supreme Court. The three protesters arrested at the November 2019 nationwide demonstrations, were sentenced to death while their lawyers had no access to their case file until July 15th.
Speaking on Monday, July 20, Ebrahim Raisi, the head of the Islamic Republic's judiciary, claimed that public pressure played no role in the judiciary's decisions, without directly referring to the suspension of the sentences. He called what he claimed to be "propaganda and hysteria", ineffective.
Mahmood Amiry Moghaddam, director of Iran Human Rights, said: "The #اعدام نکنید (Don’t execute) campaign and the ensued media attention, provoked the international community’s reactions and increased the political cost of such sentences for the government. This shows that contrary to what government officials would have us believe, people have the power to make a difference. Through more unity and participation, each one of us can be effective and make change possible.”
On Sunday, July 19, four lawyers representing Amirhossein Moradi, Mohammad Rajabi, and Saeed Tamjidi issued a statement that read: "We are very hopeful that the verdicts will be overturned, and on that basis, submitted a request for the application of Article 474 to the head of the Supreme Court. According to the information received, fortunately this request was accepted by the Chief Justice and the case was referred to one of the branches of the Supreme Court for re-examination." According to the lawyers, the planned execution of the three protestors has been suspended until the determination of the judicial process.
On July 10, Mostafa Nili, the lawyer representing Saeed Tamjidi and Mohammad Rajabi, tweeted: "Unfortunately, the death sentences of my clients have been upheld by the Supreme Court." This sparked a mass online protest by Iranians that saw the “don’t execute” hashtag trend worldwide for hours. The unprecedented spread of the Farsi hashtag provoked a reaction from the international community, including UN human rights experts, who announced their support for the mass demand.
On July 15, Radio Farda reported: “Internet Access Disrupted In Iran As Uproar Rises Against Executions”. Following a string of announcements by the Islamic Republic of Iran about convictions, death penalties for protesters and executions of political prisoners, a wide cross-section of Iranian resorted to a campaign on social media against the authorities. The Persian hashtag #DontExecute trended in the world, occupying the highest spot Tuesday evening GMT time. Diverse individuals and groups usually at odds on social media united in supporting the call for the Iranian government to stop executions and persecution. Social media activists, including the exiled Prince Reza Pahlavi also began circulating the English version of the hashtag; #StopExecutionsInIran.
As the social media push gained momentum, reports emerged that internet connection in Iran was slowed down by providers that are controlled by the security organs of the Islamic Republic.
NetBlocks.org, an internet monitoring group tweeted that “Significant disruption to multiple networks in #Iran” at 21:30 local time significantly impacted “citizens’ ability to communicate; incident ongoing”.